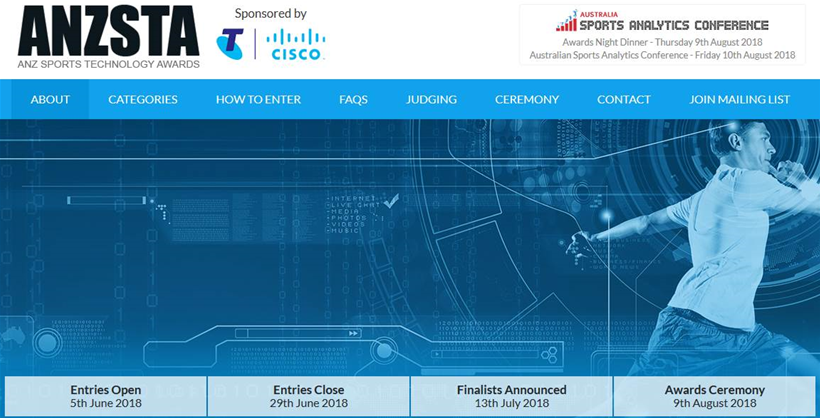 The achievements of Australian and New Zealand sports technology will be recognised at the inaugural Australia & New Zealand Sports Technology Awards (ANZSTA) on Thursday 9 August 2018 in Melbourne.

The awards will be held at the Melbourne Convention Centre ahead of the Australia Sports Analytics Conference. They are supported by IoT Hub publisher, nextmedia, the Telstra-Cisco alliance, Vumero Sports, the Australian Sports Technologies Network (ASTN) and LaunchVic, Victoria's startup ecosystem agency.

The awards celebrate excellence and innovation from Australia and New Zealand-based organisations in the application of data and technology across the full spectrum of sports and eSports: analytics, coaching, management, player performance and health, fan engagement, broadcasting, media and stadiums.

There are 11 award categories,  with eight focused on projects and achievements in 2018, two awards focused on startups and one award for a lifelong commitment to the Sports Technology ecosystem in Australia.

Nextmedia Custom general manager Darren McNally said the awards were being introduced at a time when the Australian sports technology industry was growing rapidly.

“It’s an exciting time in the world of sports tech. Staging these awards in partnership with Cisco/Telstra, Vumero Sport, ASTN and LaunchVic enables us to give Australian and New Zealand sports tech achievements the recognition they deserve,” he said.

The managing director of the Vumero Sport, John Persico, said the awards aimed to recognise the achievements of local sports tech companies and to increase their profile in the global sport tech industry.

“There are a lot of very successful sports tech SMEs in Australia, but we need to turn some of those into great world-renowned companies. These awards aim to be a mechanism to do that.”

“Australia is a strong market for sports technology, so if you win one of these awards it means you are up there with some of the best in the world,” Persico said.

“We might be a small country by population and economy but there is a great opportunity to export sports technology.”

It’s free to enter the awards. Nominations are now open and close at 5pm on Friday 29 June 2018. A shortlist of the top three entries in each category will be announced on Friday 13 July.

The winners will be announced at a gala dinner at Etihad Stadium on Thursday 9 August 2018 ahead of the annual Australia Sports Analytics Conference the following day, with over 1000-attendees, focused on how data and technology impact the Sports, Media, Entertainment and Health industries.