How Wyndham City Council took to the skies. 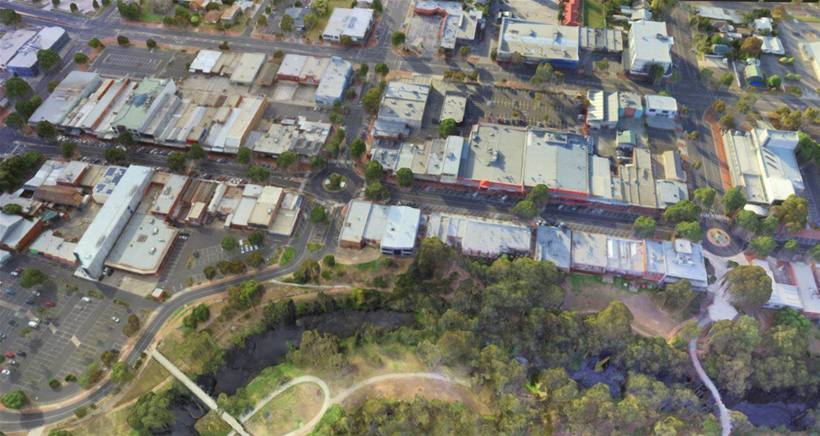 Victoria's Wyndham City Council has started using consumer drones to create 3D maps of Werribee CBD to give developers and residents a richer picture of the city and to facilitate construction efforts.

The council has plans to build four multi-storey office buildings over the next two to three years which will transform Werribee’s skyline markedly, as much of the CBD currently consists of single or double-storey buildings.

The council has created 3D maps and point clouds (a collection of coordinates representing points in three-dimensional space) of the CBD area, which will then be augmented with 3D models of the proposed buildings.

This would then provide a more complete and visual understanding of the potential impact of having the taller buildings in the area for residents, developers and other stakeholders.

The drone initiative is the brainchild of Wyndham City Council’s smart city digital innovator, Dr Adam Mowlam, and he told IoT Hub that it will help facilitate the rapid expansion currently experienced in the region.

“The outer areas of Werribee are [among] the fastest growing in Australia, with something like 70 homes being built there per day,” he said.

“Over the last 12 months, there have been a lot of planning changes where you can now build up to 20 storeys in some parts of the CBD.

“Moving from an environment that’s two to three storeys all the way up to 20 storeys is a huge change to the visual impact of the area, and also alters the fundamental purpose of the CBD.”

Mowlam said that the 3D modelling currently underway will be used to provide a snapshot of Werribee CBD in its current state, prior to the commencement of construction of the four high-rise buildings.

“Originally, we started the work as a visualisation project, but 3D modelling provides a whole host of other benefits, such as utility mapping,” he explained.

“From an IoT perspective, if we want to put in a multi-storey car park with parking sensors, for example, we have a 3D model that can help us plan such an implementation much more than a 2D model.”

How did they do it?

Mowlam decided to use DJI’s Phantom 3 Standard drone, which is available off-the-shelf at a reasonable price, and is far cheaper than the commercial-grade drones.

“These drones have a 22-minute flight time, so we segmented the 120-hectare survey region into 20 sections using flight planning software,” he said.

“In terms of the photo capture, we took images from a top-down perspective, forward- and backward-facing, and also left and right angles, so every flight line was flown five times capturing different camera angles.

“The 20 areas were photographed over a period of four days last January, and because we had to stop flying at peak times, we also had to perform some colour correction on the images to cater for the early and late times we were capturing those images.”

The 3D maps were created at different resolutions, with the highest-quality models providing resolution down to 3cm.

These models will then be used for various purposes and scenarios, according to Mowlam.

“The point clouds will also help us with mapping components of underlying infrastructure, like sewage, power, and Wi-Fi access.”

Mowlam said that due to the large number of capital works projects underway or soon to commence, the council is looking to perform weekly surveys of the CBD area, and combine the images captured from the drones with plane-based aerial photography.

What challenges did they face?

The sheer number of photos that were taken with the drones presented challenges for the team, as the software used to stitch them together and create the models wasn’t designed for the volume of imagery being uploaded.

“We took about 8000 photos, so to process that much through desktop software is challenging enough, and through web-based software is almost impossible,” Mowlam explained.

“We ended up having to process the areas photographed in smaller segments and then tie them together.”

Limitations with the drones themselves also caused some areas to be missed, due to concerns around battery life.

“We had to vary the flight lines we took depending on the area, the condition of the drones and the environment, which meant some of the joins we had in the 3D model weren’t quite as neat as we’d hoped,” Mowlam said.

“We also had to perform a second round of flights in one area because the images we captured were too dark and the amount of shadow in the images were unacceptable for us.”

Mowlam chose to work with in-house resources to perform the image captures, not just because he had confidence in the skill set of his team, but also because of the lack of drone pilots with surveying experience.

“A lot of drone pilots are photographers, not surveyors. They take some unbelievable photos, but in terms of understanding the surveying software, ensuring you get the correct overlap, and so on can be difficult,” he said.

“Our own team certainly didn’t get anywhere near perfect results either, whether it was overkill in one area or a join in another area not being fantastic.”

The 3D modelling exercise will not be a one-off event. Rather, Mowlam intends to perform a survey and create the 3D models and point clouds every six months.

He also hopes to continue to use the drones to fill the data gaps left by plane-based two-dimensional photography.

“One of the big benefits of drones is that you can fly them at almost any time, whereas to send a plane up requires a high level of planning and logistics coordination, and also incurs a significant cost,” he explained.

He added that it’s typical practice for councils to go without plane-based aerial imagery between May and October due to adverse weather conditions and poor light, so he envisages drones to help provide images during these times.

“People have been really surprised with the quality of the images we’ve achieved with the drones, so we’ll give council staff the opportunity to specify the flights they want performed, based on the use cases they’re working with.”