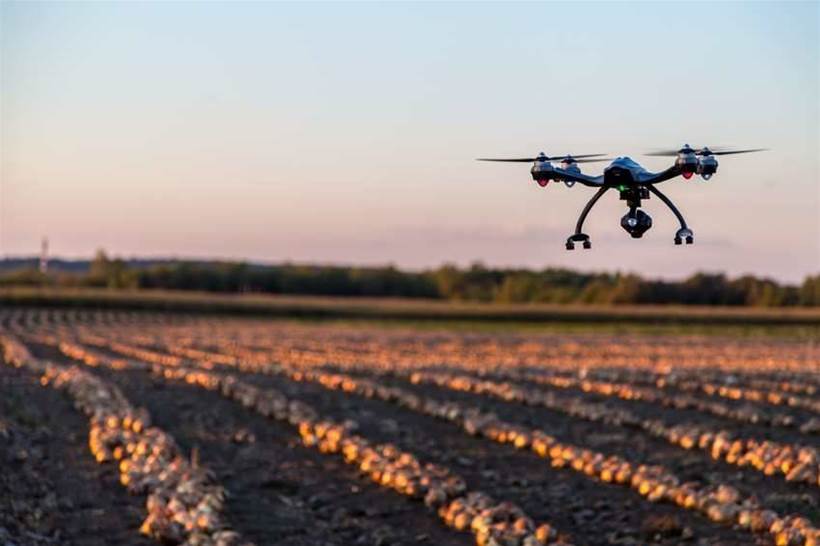 Using drones to gather data is quickly growing in popularity, and Australian start-up Propeller Aero believes it has solved a long-standing problem with positional data accuracy.

Company co-founders Francis Vierboom and Rory San Miguel spoke to IoT Hub about the technology and what it means for their customers.

“The way drone data works currently is that you’ve usually got an inaccurate GPS on the drone, similar to that found on your phone or in a car, which is accurate enough for navigation. However, it isn’t accurate enough to provide survey-grade information, as it is accurate to metres, rather than centimetres,” San Miguel explained.

AeroPoints eliminate the need for costly surveying, according to San Miguel. They contain inbuilt PPK (post-processed kinematic) capabilities, which provide accuracy down to two centimetres, along with Wi-Fi connectivity to upload position data and a solar panel for continuous power.

“The traditional method of using surveyors to paint white crosses on the ground is counter-intuitive to the use of drones, we believe, because some of the appeal is that you’re no longer having to trudge around a site and take survey measurements,” he said.

With AeroPoints devices, commercial drone operators can now capture survey-grade GPS information without surveyors, which in turn will reduce operational costs for the operators and their customers, San Miguel said.

From concept to reality

In developing the product, Propeller Aero worked with customers who were looking for a solution to the data accuracy problem, he said.

“We worked with quarries around Sydney, such as in the Hunter Valley, and also with drone service providers who were travelling all around Australia and internationally, capturing data and making sure that the AeroPoints devices worked,” San Miguel explained.

One of the challenges the company had to overcome was a lack of standards in GPS and coordinate reference systems around the world.

“When you’re working at a survey-grade level, every country has a different coordinate reference system or they differ in how they want their country to be referenced, compared to the rest of the world,” San Miguel said.

“Traditionally, surveying has been a national skill – there haven’t been that many cross-continent surveyors out there.”

However, according to Vierboom, the company was able to develop a solution, largely thanks to Australian expertise.

“One of the best things about being based in Australia is our access to some of the leading geoscience professionals in the world,” he said.

“Australia is the home of a lot of the leading thinking on GPS and positioning technologies, and we’ve got a massive industry in surveying and a lot of experience in it, which is recognised around the world.”

Bringing the Internet ‘outside’

Vierboom sees the use of drones for data collection as “bringing the Internet outside”, and one industry in particular could find massive benefit in their deployment.

“One of the most important industries where a lot of online technology is playing catch-up is in construction, where there are still a lot of things done on paper, and there are a lot of stakeholders that don’t have a lot of transparency about what each of them are doing,” he said.

“Drones are a massive opportunity to change that, and having really accurate information is a big part of it.

“We see the construction industry, both here and abroad, as one of the most important affected industries by the AeroPoints tech.”

Vierboom also sees the mining industry – particularly companies with interests in quarries and landfill – as showing interest in the technology.