For use in buildings. 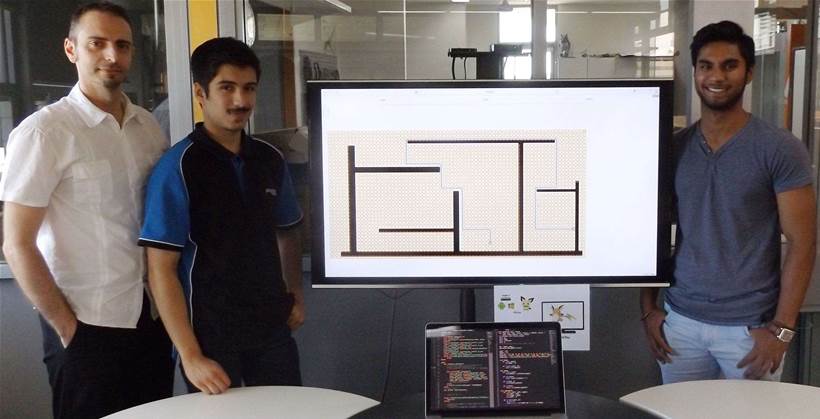 Two former students of Gungahlin College in Canberra have developed a smart mapping system designed to be used inside buildings.

Munib Syed and Damanvir Singh worked together to create the ‘Pathway’ system, using freely available software tools over a 16-week period during their Higher School Certificate year in 2015.

The software is designed to receive a floorplan uploaded by a user, along with start and end locations. The system then intelligently determines the fastest route between the two points.

“There are two sides to our software, the computer vision side, and the pathfinding side,” Singh told IoT Hub.

“We used OpenCV-Python to make the map-reading process much easier,” added Syed.

The students used A*, a freely available pathfinding algorithm, to incorporate the route determination process on any uploaded maps.

Like any software development life cycle, the students encountered a number of problems that they had to address throughout Pathway’s creation.

“For it to work, the maps had to be formatted in a specific way; there were some limitations on what sorts of maps you could input into the application and expect output, and narrowing down the limitations was a challenge,” Syed noted.

“So I had to tweak the libraries to work with our custom maps and custom map data, taking me a number of weeks.

“We also started with a different pathfinding algorithm early on, which would take 3-5 minutes to determine the correct path, which wasn’t great for user-friendliness of our application.”

The developers already see multiple potential uses for their application.

“We hope that any user can upload a floorplan and turn it into a working map,” Syed said.

“It’d be good for places like museums, tourist stops, and airports.

“The best thing about this application is that it’s cheap – we could potentially put it online, making it freely available.”

Syed and Singh did have plans to incorporate an indoor positioning system, but ran out of time during the project – again, not unlike many software development projects initiated in the real world.

“Our current system required the user to define their start and end position manually, and if they’re lost, it’s much more helpful if that start position was determined automatically,” Syed noted.

“One of the ideas we had was to use wi-fi adaptors and triangulation to determine the user’s position.”

The changing face of IT education

Gungahlin College’s IT teacher Bruce Fuda was incredibly proud of his students’ efforts, and told IoT Hub that he wasn’t the only one that was impressed.

“We invited a university professor to come in and look at the prototype, and the feedback I got was along the lines of, ‘This is stuff we get out of our third year university students’,” Fuda said.

Fuda noted that IT is slowly becoming more common in school curricula.

“IT subjects are only just being endorsed in foundation in Year 10, so we’re now at a point where in the next 4-5 years, we’ll start to see more students coming to us in Years 11 and 12 with the macro knowledge,” he said.

“What that allows us to do is start to build a curriculum that enables them to explore what they’re learning conceptually at a younger age in a really practical environment.”

Fuda added that teachers also needed to be aware of ongoing trends in the industry, and have access to IT professionals in various areas, to stay across current technologies and to assist their students in establishing relationships with the industry.

“Big companies are constantly looking at ways to improve student engagement in schools through various outreach projects, and we’re going to see more of that happening from kindergarten all the way through,” Fuda said.

“We’ll be able to do things such as put students in direct contact with engineers and developers at major companies – these connections will be quite powerful.

“It’s about putting students in contact with people they can approach, share their passion with, and try to give some direction on where they can go when they finish school.”

Fuda foresees a shift in the IT curriculum in the ACT, where options other than university enrolment will be discussed and explored by students.

“We’ll be looking at how we can potentially shift the focus away from degree acquisition to more project development and entrepreneurial start-up structure, and there’s a lot of interest amongst the teachers to do that,” he said.

“The great thing about software development that you don’t have in other disciplines is that you can self-start for free, access isn’t really an issue, and these days you can begin coding on just about anything now, so it can become a real leveller.

“Whether or not that becomes a career doesn’t really matter – the exposure at an early age allows students to start thinking about problems and the big issues in that way.”