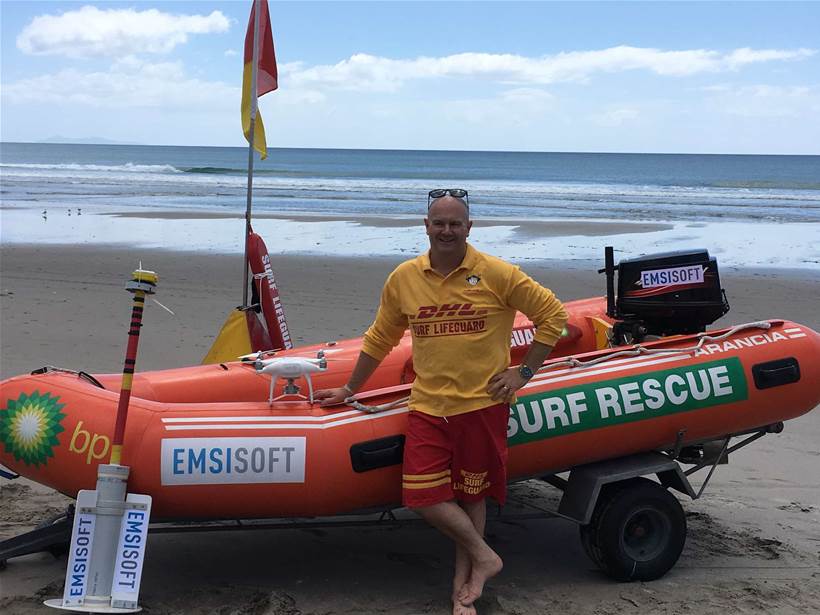 SLSNZ manager Allan Mundy alongside one of the GPS 'drifters' to be deployed (Source: supplied)

Using ‘drifters’ to plot GPS data and drones to accurately map rip currents and behaviours, the technologies will measure the physical layout of the headland rip current across a range of different swell, tidal and wind conditions during a six-week period on selected beaches.

Last year, seven people drowned in NZ as the result of a rip, and lifeguards undertake an average of 1200 rescues each year, of which 85% are rip-related.

SLSNZ national lifesaving manager Allan Mundy said that until now, current data was mapped from 500 metres off-shore. He hopes that this project will provide more accurate data which will lead to a better understanding of the workings of rip currents at different locations.

“If someone should get swept away in a rip, having the knowledge and understanding of the currents in that particular location will help narrow down the search area,” he said.

SLSNZ lifeguards will collaborate with Coastguard New Zealand to perform the deployment and retrieval of the GPS drifters, which have been designed to replicate a swimmer’s behaviour due to their weight and drifting nature.

“Half of the drifters will be modified so they will sink below the water’s surface to mimic how a body behaves once it becomes submerged after a drowning,” Mundy explained.

“This data will be priceless as it will help searchers better identify where to look for lost persons in the benthic current (the current on the bottom of the sea floor) which we don’t currently have data on.”

He said that previously used drifters and dyes have only been able to track surface currents, which often flow in different directions to those on the sea floor.

The data collected will be added to a data base to assist in future current predictions during lost person searches, and the method will be used to set a data standards for future research on additional sites around the country.

A trial run has been scheduled to take place at Piha Beach on Auckland’s west coast between November 15-18.

Christian Mairoll, CEO of NZ-based Emsisoft, said: “Our shared belief in quality online surf protection led to the partnership with SLSNZ – we share the same values and goals to offer efficient and life-saving protection [and] we are proud and happy to support such life saving research.”