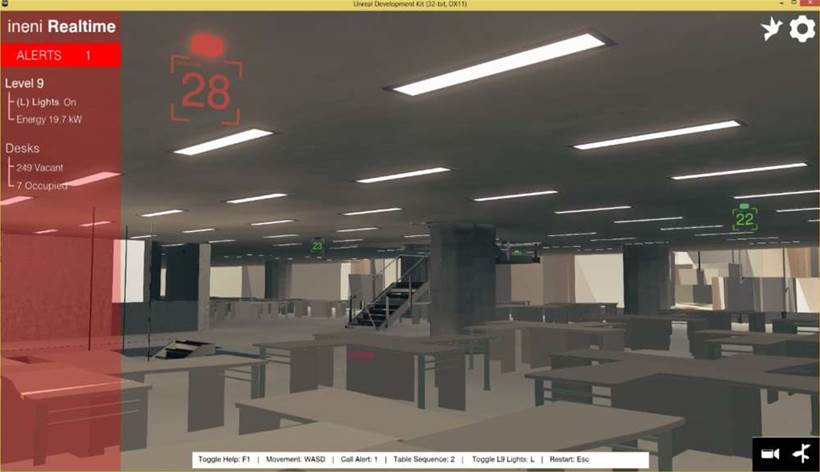 Ineni's founder and director Jeremy Harkins told a recent IoT Meetup in Sydney that the project began when Lendlease wanted multiple building systems - for lighting, elevators, concierge and temperature control, and so on – presented as a single dashboard.

“We worked with a number of partners to bring the data from these different systems in, then we worked with Lendlease’s design files to put it all together into a virtual environment,” Harkins said.

Dashboards used by traditional building management systems provided visibility over a lot of data, but could be difficult or require significant experience to interpret without 3D context, he said.

Visualising the data as part of a 3D representation of the building could assist in the design, construction and operation of the project, he said.

Harkins discussed how buildings in Barangaroo could be shown in various states of construction depending on the date and time parameters set in the platform and demonstrated a few examples.

He showed the platform's ability to accurately simulate sunlight from the Sun, and visualise the effects of shadows cast by the construction site on neighbouring buildings at any given point in time.

Harkins also showed how light at different times during a given day would enter through the windows and illuminate the interior spaces of the buildings, giving designers an insight into where to install shades, for example.

He then showed projected states of completion by moving the date and time interval forwards and backwards.

Harkins said the data used to create the 3D projections comes from project management processes which are input into a construction management system.

This in turn feeds ineni’s 3D modelling tool to provide a visual representation of projected progress.

Harkins said that one of the challenges in making the transition from building construction to day-to-day management is that the building plans are usually provided to building managers, stored on a hard drive, and rarely referred to again.

“What our system does is enable you to use those plans and constantly make updates to them as you make changes to layouts, fixtures and amenities,” he said.

In his discussion, Harkins showed a stripped-down view of the Barangaroo site, showing only the lighting installed across the buildings.

He said that this view could then connect to the buildings’ actual lighting system to provide a 3D representation of the state of the lighting array at a glance, and quickly identify where a fault is.

“One of the great things about our system is that you can also obtain a spatial awareness of where the light is located, and ensure that a visiting technician has the right height ladder to complete the job, for example,” Harkins said

“To put that in perspective, in the US, they waste $19 billion a year due to the lack of adequate equipment to repair lighting systems.”

Harkins also discussed the integration of a building's security camera system, and was able to click on any camera available and show a live feed.

“We’ve just built the 3D models and the interfaces to analyse the data streams. The real power in our system lies in the real-time data that we can obtain and integrate through IoT-enabled devices throughout the building,” he said.