Water flow velocity, levels and quality to be monitored. 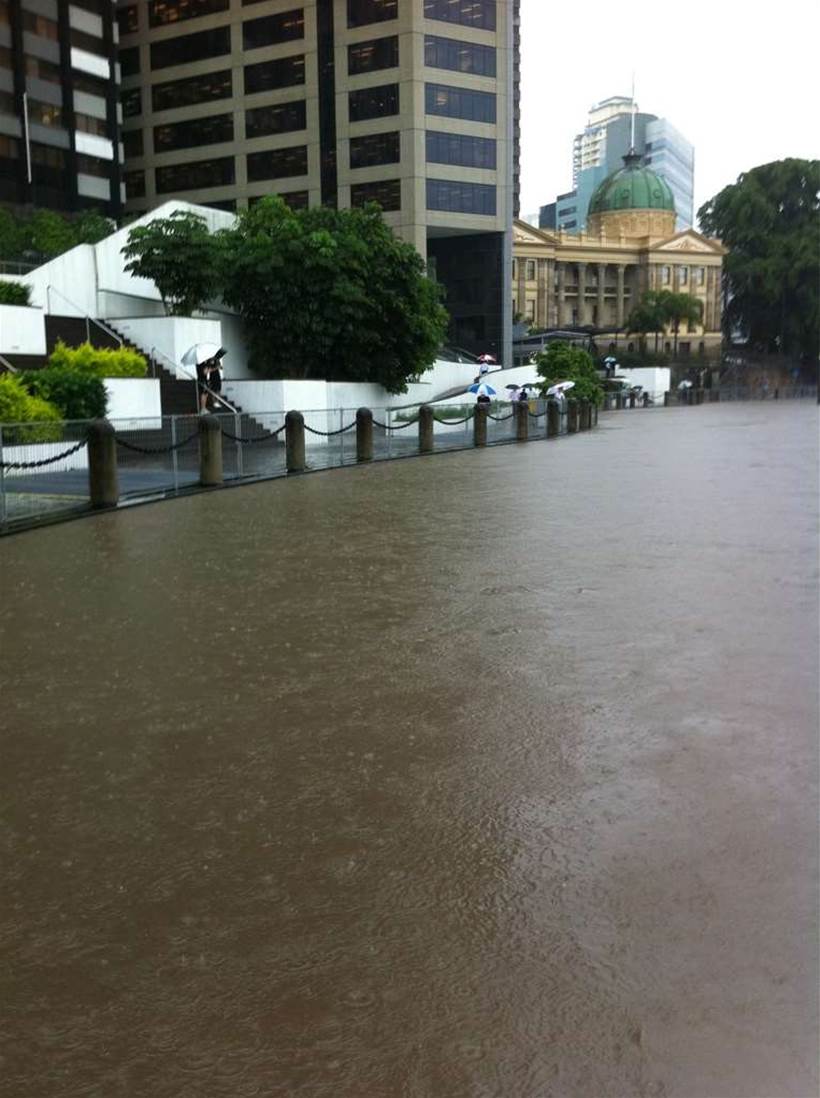 When QUT's Gardens Point carpark was indundated with water from the Brisbane River during the city's 2011 floods, two academics did the unthinkable - physically tying themselves to a safety point to collect data on the unfolding disaster.

“We were surprised by the very large fluctuations in the velocity of the water," thermodynamics and fluid dynamics Associate Professor Richard Brown said.

"One moment the velocity of the water was measured close to zero where an average person could stand up, yet within one minute it could increase up to 1.8 metres per second.”

After analysing 48 hours of flood data, Brown was convinced of the need to measure velocity fluctuations and the direction of flood waters.

In collaboration with QUT’s Professor Yanming Feng and Dr Helen Fairweather from the University of the Sunshine Coast, the three researchers created the Bob-Buoy.

Traditionally, water flow monitoring devices are placed in fixed position in the waterway and take measurements from there.

The Bob-Buoy is the first of its kind to be mobile and capable of capturing data from multiple locations.

Using advanced GPS technology that is accurate to a few centimetres, and laden with sensors to measure water flow rates and levels, the Bob-Buoy is designed to follow the natural path of the waterway it is placed into, and take measurements throughout its journey.

“The device can detect if it gets caught in a recirculation area, or if the wake of a boat goes past, or if there was a storm that would cause the velocity of the water to increase over time,” he said.

The research team has now received a grant from the Australian Research Council to embark on a three-year project together with the Sunshine Coast Council to further develop the technology and bring it to a commercially ready state.

“We hope to implement the technology such that it can assist the council in planning their coastal estuaries, waterways and canals," Brown said.

The team plans to incorporate additional sensors to monitor water quality levels into the Bob-Buoy.

He said Sunshine Coast Council was very interested in this aspect of the technology.

He also hopes to incorporate real-time transmission of collected data to a central repository via 3G or 4G.

At this early stage, data is collected and stored on the Bob-Buoy and is only downloaded and analysed when the device is retrieved.

Professor Brown and his research team encountered a number of difficulties during the design process, including waterproofing the device and incorporating and using technology that normally isn’t used for their purposes.

Another major challenge was making sense of the data collected.

“We knew the data we collected was quite valuable, but nobody had obtained this kind of data before, so we initially spent a lot of time processing all of it,” he said.

“Early on, for every hour the device was in the water, we’d have to spend at least 10 hours performing analysis to understand the data collected.

“We’ve now developed some understanding such that we can process that data much faster, and I’m hopeful we can get to a point that a non-technical person could deploy these devices, collect the data, and feed it into a processing system that will give them meaningful information, without requiring detailed mathematical knowledge.”

Professor Brown envisages multiple uses for the Bob-Buoy out in the wild, aside from monitoring flooding and stormwater.

“Inland rivers and irrigation areas are where we have concerns about flow rates and water quality, so there is some potential to use it there,” he said.

“At the moment, state governments send helicopters out during flood events to perform on-the-spot monitoring of some locations to predict water levels,” he said.

“It would be possible to use this technology to be thrown out of a helicopter into the water and have it measure the velocity of the flow and water levels, then transmit the data back to base, thereby removing the need for people to exit the helicopter and take measurements, which is quite dangerous.”