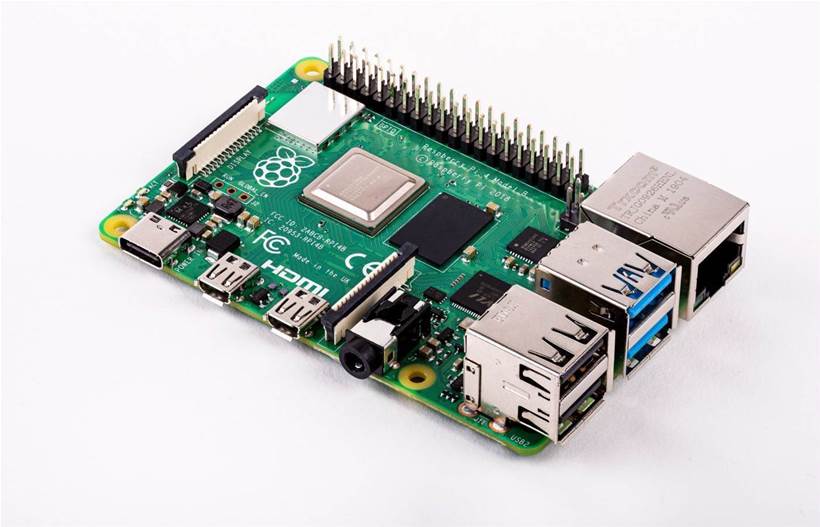 The Raspberry Pi Foundation has announced a new model of its flagship single board computer.

The new Model 4 boasts a quad-core ARM Cortex-A72 64-bit processor that can hit 1.5GHz and is said to run “up to three times faster than its predecessor.”

But the big change is in the graphics stack, which now uses the Mesa V3D driver developed by Eric Anholt at Broadcom. The new code means the Pi gains OpenGL-accelerated web browsing and desktop composition, plus the ability to run 3D applications in a window under X.

Importantly to the Foundation’s goals, it also almost-halves the closed-source code in the machine.

Raspberry Pi 4 is here! A tiny, dual-display desktop computer, with three RAM variants to choose from, and all the hackability you know and love. On sale now from the familiar price of $35: https://t.co/d9iwVidexm #RaspberryPi4 pic.twitter.com/4fll4gx1Ax

Micro-USB has been dismissed as the source of power: that job’s been given to USB-C, which the Pi Foundation points out “…supports an extra 500mA of current, ensuring we have a full 1.2A for downstream USB devices, even under heavy CPU load.”

The Pi’s Ethernet port can now reach 1 Gbps while WiFi now has dual-band wireless capabilities on the 2.4 GHz and 5 GHz bands.

The new model comes in three variants with one, two and four gigabytes of RAM respectively. The base model costs US$35, with each step up in RAM adding $10 to the price.

Core also has the $219 desktop kit that bundles a 4GB Pi Model 4 with keyboard, mouse, case, power supply, twin HDMI cables and a 32GB microSD card with a cut of the Raspbian OS based on Debian 10 Buster. As that OS is rather easier on the eye, the Foundation is cheekily suggesting that the Model 4 could serve as a desktop computer.

And why not? There’s plenty of power in the new machine. And if it’s not used as a desktop, the new machine will also do fine driving digital signage thanks to the extra HDMI port. The existence of an optional power-over-ethernet module means it’s also able to run in places other computers can’t go.

Your correspondent is currently using a Pi to recover data from an old disk and shunt it into a cloud storage locker. It’s stayed up for a month, drives a hefty monitor without complaint and shows no signs of flagging. With extra performance, memory and a friendlier OS, there’s no reason the Pi won’t find ever more uses!