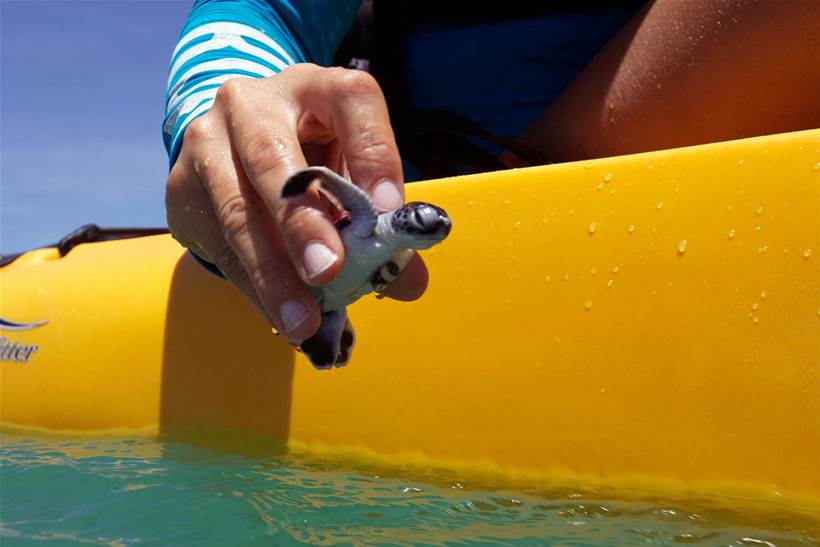 Scientists from the Australian Institute of Marine Science (AIMS) have employed the use of micro-trackers to study the effects of artificial light from waterborne craft on the movements of green turtle hatchlings in nearshore environments.

The study was completed over a number of evenings at Ningaloo Reef in Western Australia, and involved attaching tiny acoustic trackers to the turtles’ undersides.

The trackers emit a unique coded ‘ping’, which is detected and recorded by a grid of 36 receivers on the seabed three to five metres below the surface.

The scientists then retrieved the receivers, downloaded the data from them, and used signal triangulation algorithms to plot the X-Y position data of the hatchlings.

The study results – which were recently published in the Royal Society Open Science journal - supported the scientists’ suspicions that artificial light influenced the vast majority of hatchlings’ travel patterns.

Of further concern, it also caused the hatchlings to spend extended time in shallower waters, increasing their risk of predation.

"This is the first quantitative assessment of the influence of artificial light on hatchlings at sea and provides a basis to underpin direct management actions and advice," Department of Parks and Wildlife's Dr Scott Whiting said.

A new use for existing tech

Dr Michele Thums, research scientist at AIMS and the lead author of the journal paper, spoke to IoT Hub about the study and the use of technology to collect the data required.

“It’s really well-known that lights affect turtle hatchlings on their journey from the nest to the water’s edge and that it can disrupt and disorientate them, and even cause them to never even make it to the sea,” she said.

“Our study was specifically look at what happens once they reach the water, because now there are light sources on water as well, such as from ports, ships, boats, oil platforms.

“It wasn’t really known what their response to light on water would be, and it has been hypothesised that it would be the same as it is on land, but without the data to show [that to be the case], there wouldn’t be any impetus to mitigate against these potential effects.”

Dr Thums said selecting the right hardware to perform the tracking was a challenge due to the hatchlings’ size and underwater location.

“It is a big problem for really small animals, and remotely tracking them can be difficult,” she said.

“Satellite tracking is historically the best way to track the movement of animals, but the technology is still too big for animals like turtle hatchlings, so for small animals, there has never really been a good solution.

“In the past radio and acoustic tracking has been used but in a way where you follow the animals with a receiver, and the problem with those sorts of studies is that the observer can affect the behaviour of the turtle.”

This led Dr Thums' team to use separate acoustic trackers, which enabled the passive and remote collection of data without interfering with the hatchlings themselves.

She said that these acoustic trackers are normally used to track the presence (or absence) of fish, but extra development was performed to record positional data.

“You can get signals colliding, so you don’t want the trackers emitting all the time, and there’s quite a bit of science that goes into the number of ping tags you can have in one of these receiver arrays at any one time.

“A lot of people when they use this technology just use it as presence/absence data, not to calculate X-Y positions, and that’s a unique part of our study, that we’ve used this system to calculate position.”

Real-time tracking on the horizon?

Dr Thums would like to see technology implemented such that scientists could remotely track turtle hatchlings (and other marine life) in real-time without relying on satellite communications.

This concept may soon become a reality, with the onset of low-powered WAN technologies such as LoRaWAN, which offers the ability to provide wireless network connectivity to waterborne infrastructure to a depth of a few metres.

“One of the big problems with tracking any animal underwater that isn’t coming to the surface is ensuring that the signal doesn’t attenuate in air, so if we had the opportunity to connect to these low-power networks, we could perform our monitoring in real-time instead of having to wait to get our results later,” Dr Thums said.

“You could potentially change things on-the-fly, and if we did have such a system with our study, we probably could’ve ironed out a lot of the problems we had during the pilot a lot earlier.”