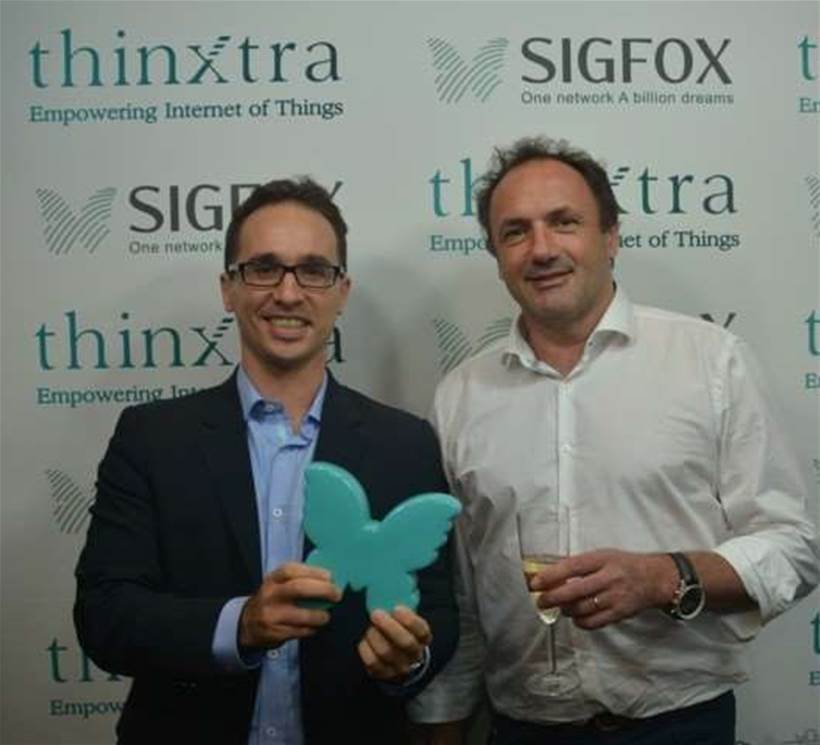 Sigfox is bringing its LPWAN-based communications service for IoT to the Australian and New Zealand markets, in partnership with Australian IoT network operator Thinxtra.

Thinxtra will deploy and operate nationwide Sigfox networks in Australia and New Zealand, offering businesses and consumers the opportunity to subscribe to Sigfox’s communications service.

The global connectivity offered by Sigfox also means that local customers can take advantage of the myriad products and solutions already developed globally by Sigfox’s ecosystem of partners, including component manufacturers, IT developers and integrators.

The two companies have ambitious plans to provide LPWAN coverage to 30 percent of Australia and New Zealand's populations by the end of the year, and to 85 percent within an 18-month period.

This A/NZ agreement forms part of Sigfox’s strategy for the Asia Pacific region, with the company also planning to add network coverage in Japan, South Korea, Indonesia, Thailand and Singapore by the end of the calendar year.

“The decision to work with Thinxtra came about due to the work they had done prior to any contracts being signed, which was to check the potential of the market, and to do that with the mindset of an entrepreneur,” Le Moan told IoT Hub.

“In order to be efficient in the market, we need to have entrepreneurs and people who not only think about business and revenue, but are also able to bring their own ideas to the table and invent and tweak within the ecosystem to create new applications and devices.”

Sigfox’s range of partners across its global network include large telecommunications providers, and while there are obvious advantages to these partnerships in terms of cell tower and rooftop ownership and speed of infrastructure deployment, Le Moan said that the smaller, entrepreneurial partners such as Thinxtra also have their advantages.

“In terms of speed of moving into the ecosystem, or tweaking the system to improve transmission rates, or in terms of creativity, entrepreneurial businesses have the edge,” he noted.

“With the years that [Sigfox] spent evangelising our network, these types of [smaller] partners are more relevant, from my point of view, to ramp up and to create amazing success stories.”

For Thinxtra, the journey towards partnership with Sigfox started a year ago prior to its own inception, according to CEO Loïc Barancourt.

“I went to France to tell Sigfox that Australia and New Zealand were very much early adopters for IoT, and that there was a need for the Sigfox network in Australia,” he told IoT Hub.

“We built a team of IoT experts and network deployment specialists with the goal of becoming the Sigfox Network Operator (SNO) for Australia.

“We then entered into a partnership with Rakon, a New Zealand technology company. They became our lead investor, but they also brought to the table technical expertise which complemented what we already had, and also enabled us to look at expanding into the New Zealand market.”

Barancourt cited Sigfox’s constant improvement of its network protocol, global aspirations and high degree of innovation as the primary reasons for choosing Sigfox over other low-power network protocol providers.

Le Moan and Barancourt said that asset tracking and agribusiness could have the most to benefit from the launch of the Sigfox network in this region.

“We’re seeing a lot of demand already in Australia and New Zealand for asset tracking capability, and another area where we could even beat the overseas markets is in smart agriculture,” Barancourt said.

“We have [agricultural] opportunities in Europe as well, but for [the A/NZ] region, we have a great opportunity to excel in this area,” Le Moan added.

“Even things like soil or cattle monitoring can be very interesting and useful for this region, and as soon you establish a lead in that agriculture and livestock management business, Australian and New Zealand businesses will have the opportunity to roll out their solutions all over the world.”

Le Moan has also been hearing about smart city applications for a number of years. Thinxtra has itself installed a handful of base stations in Sydney’s CBD, including one atop Sydney Tower.

However, he believes smart cities are still in a “proof-of-concept” phase of their proliferation.

“The problem is that most of the time, a city hasn’t got the capital to invest in truly smart solutions,” he said.

“While showing off the technology is easy to do, you need to ask who will pay for the service,  what will be the break-even point, what will be the ROI – these are questions that haven’t yet been answered.”.

The partnership comes at a time where large telcos are starting to make plays in the IoT connectivity space.

The most recent example is Telstra’s announcement that its LTE network will support the emerging Category 1 standard, with plans to add Category M (Cat M) and NarrowBand-IoT (NB-IoT) support in the future.

While Le Moan acknowledged that this competition is inevitable, he believed that Sigfox’s LPWAN technologies were a better fit for potential IoT applications.

“MNOs (mobile network operators) believe that IoT is their market because of their hardware and their ‘leadership’ in the space, and that IoT is a natural progression of what they currently do,” he said.

“MNOs have sales guys that are used to selling devices such as smartphones in which you can plug in a SIM and manage that device, but IoT is different – you have different constraints, such as medical or ethical.

“The requirements for coverage and throughput will also be completely different for IoT, and we know that NB-IoT and Cat M cannot compete with us, in terms of connection stability, cost and efficiency.”

Le Moan also believes that competing low-power, wide area network standards do not have the proven track record to compete with Sigfox.

“It’s easy to perform a demonstration or showcase in a small area or room which will work, but as soon as you want to create a global network that deals with interference and spectral noise that differs across regions, you’ll have issues,” he said.

Le Moan said that the Sigfox network’s ability to cater to slight variations in operating frequency within the unlicensed ISM (industrial, scientific & medical) bands it utilises around the world guarantees seamless connectivity as devices move between operating regions.

IoT can "change the world"

Le Moan and Barancourt view IoT as not just an avenue for revenue raising, but also as a tool to enact societal improvement.

Barancourt said that Thinxtra and Sigfox have been in recent discussions with companies in the medical devices industry to explore connectivity possibilities, and that these sorts of initiatives will bring about improvements to people's lives, more so than an increase in profits for the companies building them.

"There is a lot of innovative [medical device] activity in Sydney and Auckland, and we're hoping to connect these sorts of things now," he said.

"The fact that IoT is simple, low-cost and efficient, it changes the rationale completely of the medical device market," Le Moan added.

Le Moan said that elderly people in Sigfox's home country of France are already experiencing the benefits of IoT connectivity through the installation of equipment that monitors the aged person's activities, and that of the caregivers that attend to that person.

This activity information is then provided to health organisation and family members to ensure that sufficient and appropriate care is being provided.

Le Moan also mentioned that Sigfox's recent not-for-profit intitatives - such as providing IoT connectivity in Antarctica for safety purposes - are done to implement genuinely useful technology to ensure the safety of people and for the betterment of society.

"We believe that Sigfox can solve problems around the world that won't generate a profit," Le Moan explained.

"We know that there is deforestation in the Amazon or that fishermen in Indonesia are having problems that we can solve, but we know that it's difficult to build and justify a business model for these instances.

"[Sigfox co-founder Christophe Fourtet] and I decided to create a foundation in which various partners join us to create solutions tackling these different causes."

Le Moan added that Sigfox is set to make an announcement that it is working with the International Rhino Foundation to install trackers in Zimbabwe's black rhino population to monitor their movements and to discourage poaching.