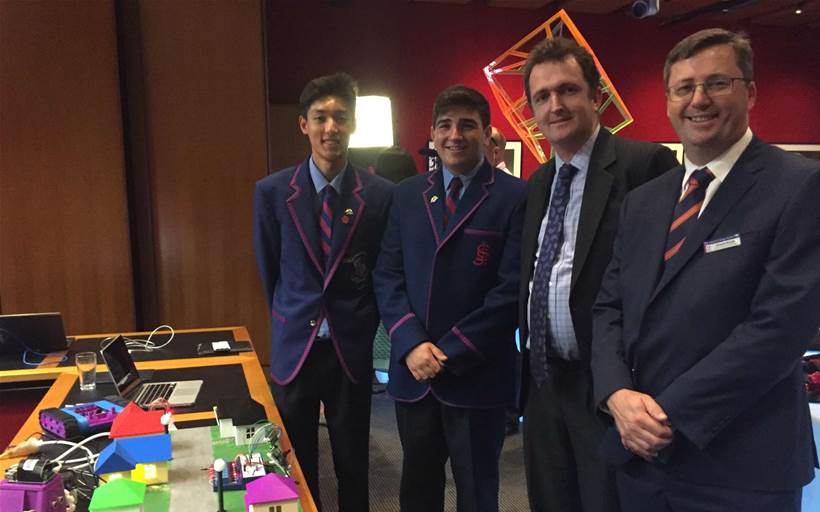 Students of St Joseph’s College in Hunters Hill have taken their software design skills into the physical realm through the use of IoT technology.

Gone are the days where software design classes were purely held in front of a computer, attempting to display “Hello World!” on the screen.

Using Galileo, Raspberry Pi and Arduino boards, the creation of complex systems with multiple functions is now an educational reality.

Showing off the fruits of their labour at the recent Coding and Innovation Boot Camp held at NSW Parliament, the students and staff involved in the projects spoke to IoT Hub about their work.

“This was a class assignment, so throughout the term we would start with basic coding, then at the end, we put all the pieces together to complete it," he said.

He also showed two robots that had built-in collision avoidance systems, "so when it gets to a certain distance from an obstacle it turns around.”

Agostino said that learning to code for physical objects – particularly for platforms such as Galileo and Raspberry Pi - helped him overcome the difficulties he used to have with software design.

“I’ve always struggled with coding, but these projects made it so much easier,” he explained.

Agostino said the creations – in particular the wi-fi-connected robot – could be used in a military context, where mobile communications are paramount.

Smart cities on the curriculum

Also on display was a scale model of a smart city. Jordan Lewis, another student at the school, explained the technology used for this project.

“The smart city is based on the Galileo board, and it features seven relays which control each of the houses and a light sensor,” he said.

“The light sensor is programmed to enable and disable the street lights in day and night situations.

“The Galileo [board] is also used to manage the motion sensor, which can also enable the street lights.”

Being able to provide such an interactive and rewarding software design curriculum does not occur without the endorsement and support of the teaching staff.

Graeme Kachel, the director of innovation and technology at St Joseph’s College, spoke about the level of engagement in these subjects at the school.

“The [students] mainly have been doing a lot of work in their own time around these projects, because they’re interested and passionate,” he said.

Teacher Tim Clark – who himself created the base build for the robots so the students could add functionality to them - said that his objective with the class is to “get the students to use software design in a more interesting and achievable way.”

“All the hardware we’ve brought in has added a lot of interest in the whole thing.”

This is the first of a multi-part series on the ways IoT is making its way into Australian classrooms and learning environments. Stay tuned to IoT Hub for future installments.