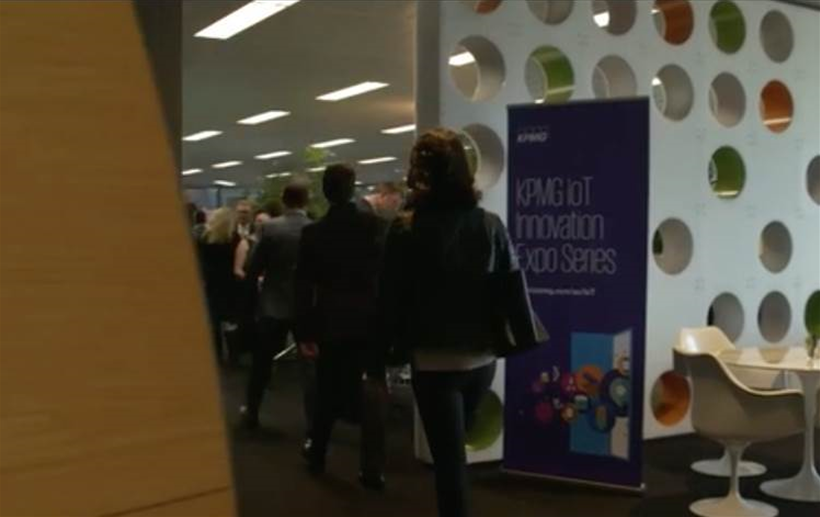 A large contingent of Australia’s IoT ecosystem came together with 300 utility organisation representatives at KPMG’s IoT Expo in Sydney.

The gathering was also attended by NSW Minister for Resources and Minister for Energy and Utilities Don Harwin, who highlighted the growth opportunities for IoT in his portfolio areas.

KPMG NSW Chairman Martin Blake said that KPMG had put on the IoT Expo “to really lift people’s heads up and have a look at the art of the possible.”

“We talk about new latitudes, new attitudes, and this expo provides a wonderful opportunity to bring together some of the best minds in Australia and the world around the internet of things and we’re very proud to do that, and we’re delighted to work with the NSW government on that,” Blake said.

A cross-section of vendor representatives were also in attendance.

John MacLeod, a Watson Internet of Things Specialist at IBM Australia, said that the water sector was of particular interest to his organisation.

“A lot of people in that space have no ‘eyes’ on their assets, so a lot of organisations are investigating the potential to put simple devices on their assets to determine when there’s a potential for failure,” MacLeod said.

“I guess the headline for Taggle is we work with 25 water utilities in Australia now, and last calendar year we delivered 1.3 billion water meter reads to Australian water utilities.

“That’s orders of magnitude more than anybody else.”

Renald Gallis, VP Ecosystem & Marketing at Thinxtra said there were innovative solutions emerging for water all the time.

“We’re connecting things, so in a simple way and trying to change the way things have been done before in that segment,” he said.

“An example is now we can monitor the level of water in sewers using a simple device that attaches to a manhole and monitors the water level [below].”

A number of vendors and service providers discussed connectivity options as well as platforms that could be used to bring devices, data and traditional enterprise systems such as enterprise asset management (EAM) and enterprise resource planning (ERP) together.

“So, for example, utilities are looking at what they can do with all this data, what actions they can drive and how they can create work orders inside their EAM and ERP systems. That’s where our work ends up.”

“We’re also starting to develop now [platforms to]  take the data from those devices and start pushing it to the right applications and analytics,” he said.

Microsoft’s Australian Internet of Things Lead Matt Sinclair said that data “is the next big wave of innovation for customers.”

“We’re making sure they have strong data estates [and] that they can take advantage of these new advanced capabilities by using our Azure cloud platform,” Sinclair said.

“So within IoT for power and water utilities, we take all that background that we have in [those sectors] and we inject it into streaming engines that can be run on the edge, in data centres or within the cloud,” Bowen said.

“To do that we need to be more efficient and the IoT solutions that are available to us today help us do that,” Yager said.

“We’re very invested in that through our EcoStruxure solution where we can produce in the energy management and automation space connected devices and edge control devices and a range of analytics apps and services.”

Itron director of solutions delivery in Asia Pacific Mark Atkinson said that his company differed from others in that it used open - rather than closed - technology.

“I think the key differentiator for Itron is we’re not providing a closed system,” he said.

“We’re providing an open ecosystem for people including using third party end devices, also enabling you to build your own devices and connect those up to the network.”

Tom Raynor,  Business Development Executive for Myriota, said his firm specialised in “sending small amounts of data from any location on the planet at ultra low cost” over satellite infrastructure.

“When you integrate our device - so this is a little satellite transmitter - with any IoT device or sensor or machine or asset, you can send 20 bytes of data direct to a constellation of satellites without the need for any other terrestrial infrastructure at all - so very much a remote IoT connectivity service,” he said.

Freestyle Technology General Manager of Development & IT Sean Brown said his company provided “simple” technology to connect “any device and any network into a single platform”.

“We can take smart or ‘dumb’ meters, add communications to them over any protocols, and bring them into one platform so our customers can view alerts and real time usage so they can get accurate information to give to their end customers,” Brown said.

ABB Australia Industry Solutions Executive for Utilities Ravi Kiran said his company used systems to “extract data from a number of assets, run it through analytics in the cloud using our IoT technologies, and identify the high risk assets that are looking to fail” so that maintenance and capital budgets could be directed that way.

NNNCo founder and CEO Rob Zagarella, said his company was building out LoRaWAN networks “in partnership with our infrastructure partners in various sectors of the industry, and the water sector is a key part of that.”

Meanwhile, Giovanni Polizzi, Energy Solution Manager and Business Development at Indra Australia said his company is “trying to bring industrial IoT into the [electricity] distribution networks, trying to monitor and control all the distributed energy resources and assets in the network, and providing real time information so real time interaction with this asset.”