IoT takes a team – but many companies are only ready to pay for one person. 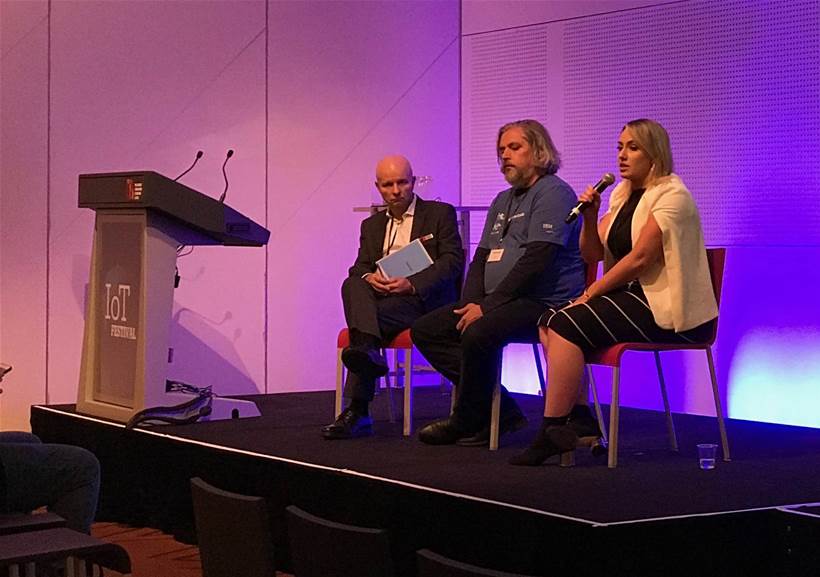 L to R: Zbignew Zablocki of Swinburne University of Technology; Craig Murphy of IBM; and Jessica Reesby of Reesby IT Recruitment.

Companies are limiting their ability to embrace Internet of Things (IoT) initiatives by expecting too much from a market that is struggling to provide enough specialised skills, a panel of skills experts has argued.

Many of those companies believe they can hire one person with the technical, engineering, robotics, automation, security, analytics and other skills necessary to make IoT work, technical recruitment specialist Jessica Reesby, of Reesby IT Recruitment, said during a panel session at the IoT Festival this month.

Those same companies baulk when they’re told they will need to hire a team of 10 to 15 people to get all of the skills they want, Reesby said – generating disappointment and deferred investments from companies that still don’t fully understand that IoT is an ecosystem play at heart.

Companies “want it all and that’s why, when you look at some of these jobs being advertised, you’d be lucky to find even one person for that job,” she said, noting that current job listings suggest there are just under 300 unfilled IoT positions in the market at the moment.

“Being realistic when hiring is good, and getting a team together is even better.”

Industry needs to take the initiative to resolve the damage caused by mismatched expectations, noted Zbignew Zablocki, a program co-ordinator at Melbourne’s Swinburne University of Technology, who has been working to integrate IoT-relevant skills into the curriculum.

“We are serious about this because the industry doesn’t respond fast enough to change,” Zablocki said. “There is only one way at the moment” to make them understand – and that is to “shake up the ground and business will understand they need to go on this wave.”

“If not, they will start to suffer.”

The disparities between IoT demand and supply had proven challenging for the startup community, where a broad range of IoT-related projects were slowly coming to fruition

“There’s a big gap there,” said Craig Murphy, ANZ developer advocate for startups with IBM. “The projects and opportunities are there, but businesses don’t necessarily want to pay.”

“I probably have seen more broken IoT projects than ever,” he noted.

“They’re all looking for this person who can do everything, but they don’t have the actual experience. Connecting stuff to the Internet is super scary – and it’s about teamwork, which is something corporates miss a lot.”

Universities “have failed students a lot because they are not preparing students for jobs,” she said, adding that students interested in areas like IoT were often taking a DIY approach by pursuing short courses to fill out their skills.

Growing demand for IoT had driven greater interest in skills such as PCB design, micro-controller engineers and designers “that we thought wouldn’t be around again,” Reesby said, “and they’re coming back from the dead.”

“If we’re deploying smart cities, factories and homes, we will have more interactions with those types of characters – and we are going to have to learn a new industry as well.”