An early example of how we will cook meals in the future? 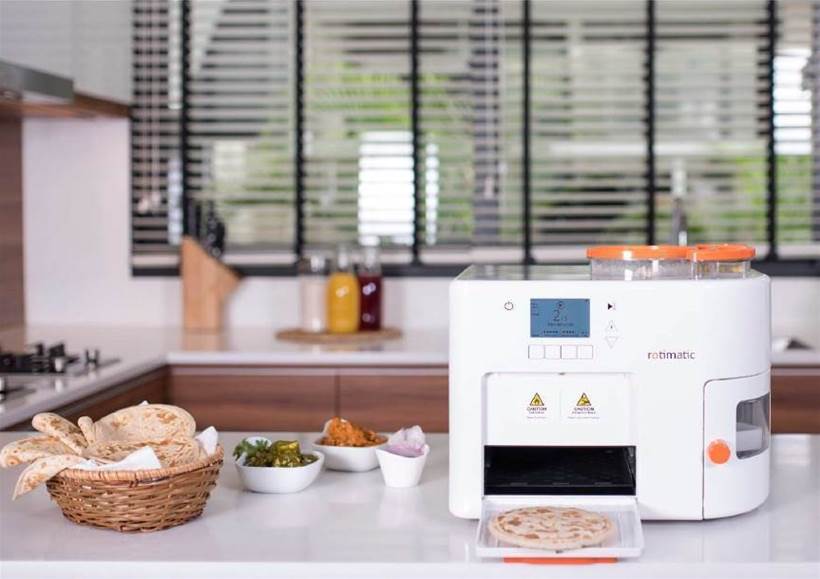 Flatbread: it’s one of the simplest man-made food products, known in its various forms as roti, chapatti, paratha, tortilla. About one billion people eat one or other of these days. And hundreds of thousands of them are prepared to pay $1000 for an 18kg robot to churn these out just one of these automatically, the roti.

The duo spent eight years developing multiple iterations of Rotimatic before launching the commercial product in June 2014 (at a discounted price of $US599), achieving instant success: within a week pre-orders were worth $US5 million. As of February 2017 the company claimed pre-orders exceeded 300,000 and were worth $US200 million.

The company behind the product, Zimplistic, says it has “just launched Rotimatic in Australia”. It’s not clear what exactly this means, because the product is only available online from the Zimplistic website where the price is given in US dollars. However, where there was previously a waiting list on the website, that has now disappeared following an enquiry from IoT Hub.

A Zimplistic spokesperson told IoT Hub there were long-term plans to sell through Australian retailers, but this would not happen any time in the near future.

If rotis are a regular part of your diet, the Rotimatic is certainly an impressive beast. You just put in flour, water and oil into separate containers, specify the number and thickness of rotis required and within a few minutes it will start spitting them out at the rate of one per minute.

According to Zimplistic, at its heart is a 32-bit microprocessor that controls 10 motors, 15 sensors and 300 parts, protected by 35 patents  that  can spit out baked rotis at a pace of about one per minute.

It is “an evolving kitchen robot with artificial intelligence and IoT capabilities”. This allows “the Rotimatic to automatically upgrade itself with the latest software updates and remote troubleshooting capabilities”.

This, Zimplistic says, “means that Rotimatic will keep getting smarter over time and users will be able to enjoy all of the new features instantly, including recipes.”

As anyone who has attempted to make pastry will know that turning the dry, fine powder of flour in a smooth, elastic dough is no mean feat. According to Zimplistic, this involves “accounting for the flour type, water quantity and ambient temperature in real-time … [and requires] real-time computations to mirror the human judgment needed to make perfect dough balls every time.”

One reviewer of the product was not impressed, describing it as big and expensive and saying it “only makes roti”. However, the reviewer did concede this to be no mean feat.

“On paper, the steps to create this Indian flatbread seem easy: You combine flour, water and oil, roll out flat discs of the dough and cook them briefly over direct heat. In reality, it takes years of practice, patience and guidance to make perfect batches of this unleavened bread.”

Just another small step on the road to robot domination – and an indication of how we will cook meals in the future?