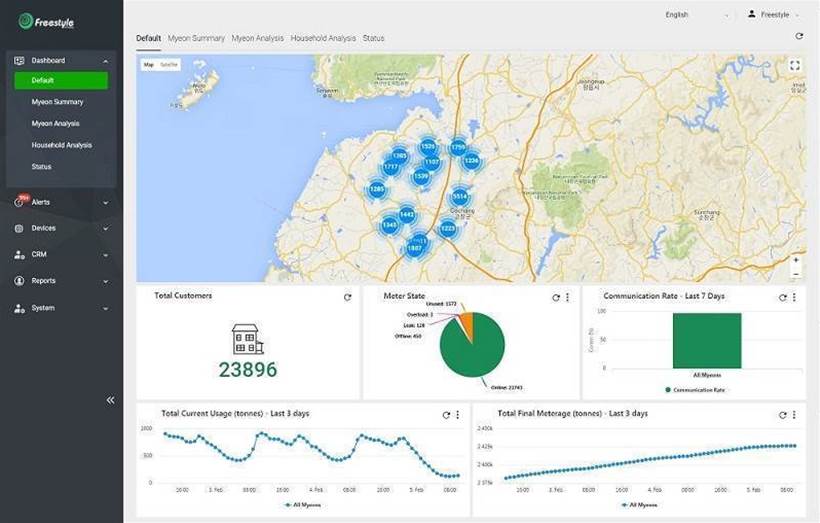 The system comprises Freestyle’s IoT platform, smart meters and wireless communications. According to Freestyle it will enable end-to-end visibility of all water assets, improved leak detection and automated meter reading.

The company says a unique feature of the IoT service will be its ability to support the wellbeing of clients, such as elderly citizens, by raising an alarm if water usage drops below normal levels.

The rollout commenced in February to an initial 2,300 homes and is due to be completed in June.

Freestyle’s contract with Gimje follows a 2017 $A5.8 million contract in Gochang South Korea, completed in December, under which Freestyle installed smart water meters in 24,000 homes as part of a blanket deployment of smart water meters. This, Freestyle says, made Gochang the first South Korean municipality to adopt such an approach across all households.

Freestyle claims to connect more than 30,000 gas and water customers across Australia, Japan, Taiwan and Korea and to process more than 20 million transactions monthly on its IoT platform.

It says the system is extensible for artificial intelligence applications. “For example, Freestyle is commercialising a predictive AI algorithm that uses gas usage data to accurately forecast future consumption and provides an optimal job list and driver route for just-in-time, gas bottle replacement.”

In June 2016 Freestyle opened an R&D centre in Mount Waverley, Victoria, with managing director Mohan Jesudason saying: “We’ve invested more than $45 million in developing our innovative IoT solutions and customer base in Asia – and we project generating more than 150 high-tech jobs and exports in excess of $200 million in the next few years.”

Freestyle has partnered with German company Elster, a Honeywell subsidiary, to jointly developed what it claims to be the world's first digital ZigBee enabled water meter and with Taiwanese gas meter manufacturer EPC to develop network interface cards based on ZigBee that allow for remote readings, real time alarms and valve control.

A key component of the Freestyle technology is the Freestyle Microengine (FME), which Freestyle says is an IoT game-changer. “It can turn a 'dumb' device into a decision maker (and potential life saver) and all FME enabled devices are 'comms agnostic',” it says.

“This means they can use any industry standard communication protocol for wireless and fixed lines such as 3G, ZigBee, Ethernet, WiMax, DSL, etc. to communicate with our IoT switch and then on to you …. [FME] can support simple battery operated devices right through to complex environments with thousands of devices.”