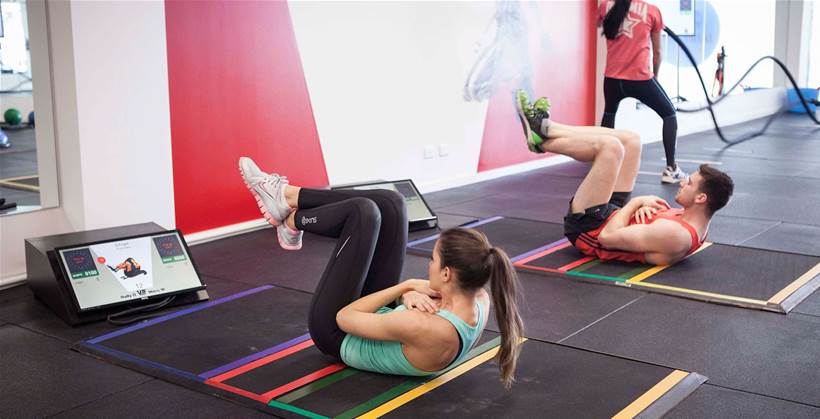 A Melbourne company is using IoT technology to provide gym goers greater insights into the effectiveness and efficiency of their workouts.

Versus Fitness has equipped a gym in Moorabbin with sensors on equipment such as rowing machines, kettlebells, battle ropes, resistance bands and floor mats to record actions taken with them.

Motion tracking cameras and digital displays have also been installed to provide a real-time view of its members’ workout routines, and provide feedback on their exercise form.

Most of the equipment has been developed by the company’s in-house team of software and sports science experts, and the pressure-sensor technology used in the smart floor mats were created by RMIT University of Melbourne.

The activities of the patrons are recorded and results can be posted on digital leaderboards, providing a ‘gamification’ experience for those that wish to use friendly competition as a motivator to exercise.

The studio premises also acts as the company’s research and development facility, where the company is able to obtain the feedback from its members and debug any technical issues with the hardware and software.

The internet of gyms

Brad Bond, founder and CEO of Versus Fitness, spoke to IoT Hub about the company’s use of IoT to improve the effectiveness of gym workouts and make sports science technologies more accessible.

He said that ‘gym junkies’ who already attend gyms regularly or those that go to gyms to socialise are not the company’s target markets.

“We see the biggest market as the over 80 percent of the population who have never been to a gym, and over the last few years of testing and R&D that we’ve conducted, the people that we’re finding are coming back on a regular basis are those that are new to the gym experience,” he said.

Bond said that the philosophy the company has with its products is not to develop new pieces of equipment with the technology integrated into them, but rather to augment off-the-shelf equipment with the sensors and electronics developed in-house to collect the data required.

“We have used everything from standard rowing machines and stationary bikes, which already create a data feed we can tap into, to functional equipment like kettle bells and battle ropes that we’ve added our own sensors to,” he said.

“We see the technology we’ve developed as a real-time, data processing platform that can be attached to a lot of different types of equipment.”

He said that gym users will have natural proficiencies and deficiencies with certain types of equipment, and said that the system is able to recognise those differences and tailor the workouts for each piece of equipment used.

For example, he said: “Some of them might be really good at cycling, but they’re not so good with upper body strength, so one of our focuses is ensuring that they stay motivated as they transition between equipment.”

He said the ability of the platform to record ‘personal bests’ for gym members on different exercises and equipment provides that motivation, and their research has found that this ‘gamification’ of users’ workouts can be more effective than having a personal trainer pushing them.

“We see it as motivating people with a carrot, rather than a stick. Many personal trainers use the stick approach, yelling at you to perform more reps, but we’re showing our users the personal bests they’ve achieved, and encouraging them to beat their scores to win achievement badges, similar to the console gaming experience,” he added.

Bond added that the motion tracking system will provide immediate and constant feedback on poor exercise form, compared to an instructor who may not share that information as quickly or has to monitor multiple people simultaneously.

Bond said that the system is capable of integrating with heart rate data collected from wearables, but the company has yet to implement that functionality.

“We’re not yet confident in the accuracy of wearables that monitor heart rate, especially those that rely on optical technologies to monitor blood flow,” he said.

“We have tested devices like the Mio, the Apple Watch and other big names, but when you’re performing high-intensity interval workouts at our gym, they’re basically useless and only really work when you’re standing still.”

Bond also observed that users of wearable technologies at Versus’ facility stopped using them over time as the system provides much more information about their fitness and progress than the wearables do.

Expansion on the cards

“We’re in the process of setting up an IoT-based gym franchise in Korea based on the technology, where we will be establishing a fully automated, 24-hour gym circuit system,” he said.

He said that users will use wearable devices to interact with the security system, lockers and vending machines, along with the gym equipment itself.

“We’re also working with the Korean government about a few additional enhancements over what we currently do with our systems,” he added.

Bond also said that he would like to expand the product range to cater to the home user market in Australia, but a number of factors are preventing that from occurring.

“There’s a lot of cost in the creation of the systems, and getting it down to a consumer price point would be difficult,” he said.

“We also want to focus on one particular market at a time, and ensure that it’s successful there before we spread ourselves too thin.”