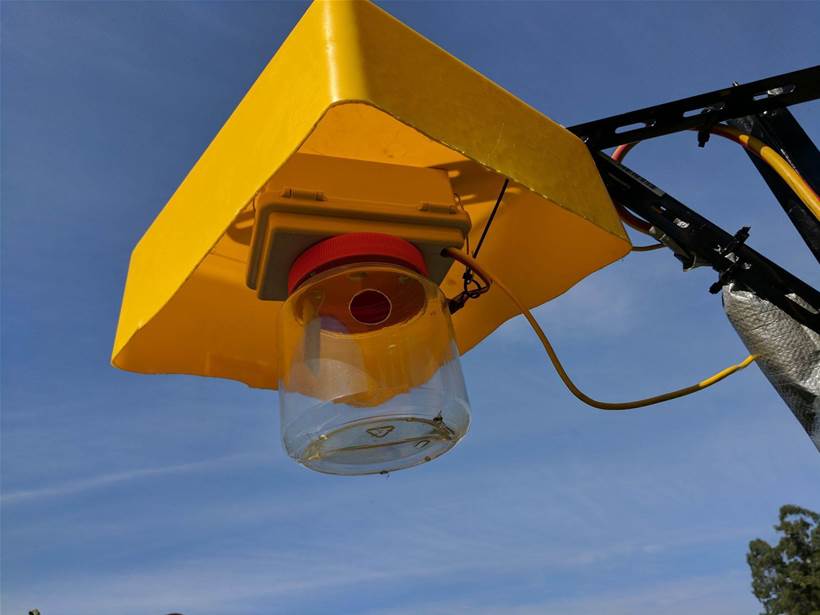 Orchard growers in country Victoria have adopted cloud-connected fly traps to understand the movement of fruit flies throughout the area.

Greenwood Orchards in the Goulburn Valley town of Merrigum is leading the technology-based charge to combat this local pest, and has enlisted the help of local technology provider Advance Computing to provide a more intelligent method of monitoring fruit fly populations as they pass through the area.

To do this, Advance Computing have attached high-definition cameras to specially designed bio-traps throughout the orchard farm.

These bio-traps would lure the flies in, from which the growers would then manually trigger the attached cameras to capture images of the trapped flies during routine inspections.

This image data is combined with GPS location information on a companion app on the grower's mobile device and uploaded to an Azure analytics platform that keeps a record of the data.

The data is then aggregated with other information collected from other traps deployed at other properties and managed by other growers, and fed back to the mobile app, giving all participants a township-wide view of the fruit fly dataset.

“Information about the flies is quite scarce at the moment,” said Advance Computing’s services and sales director, Chris Motton.

“Government departments do have some data, but it’s mostly contained within their own systems.

Why are fruit flies a big deal?

Greenwood Orchards uses bio-dynamic methods of cultivation, which discourages the use of insecticides in order to preserve the health of the plants, soil and other ecosystem inhabitants.

Current owner Lynton Greenwood has enjoyed continued success and certification as a truly organic grower since taking the reins of the business in 1986.

Unfortunately, the non-use of insecticides brings with it the increased threat of pests, and for Greenwood Orchards, this has come in the form of fruit flies which migrated to country Victoria from the southern states.

These fruit flies present a real problem, as they can decimate a grower’s yield by up to 90 percent, and have been an issue that has built up to a critical state over the last few decades, according to Greenwood.

“Every now and then for the last 30-odd years, the government departments that monitor fruit fly populations would notice a rise around town, and then cold winters would smother the population, but they would never get into commercial orchards,” he explained.

“Three years ago here in the Goulburn Valley, it was like a tidal wave. The flies had already made their way through Albury and Cobram along the Murray River in the years before, and it really impacted those areas quite heavily.”

At the time, Greenwood deployed basic bio-traps around his orchard to combat the infestation. These traps are still used today, and number over 6000, spread across the entire property.

Because of Greenwood Orchards’ status as a Grade A bio-dynamic grower in particular, pesticides were ruled out as an option, making the traps the only method of minimising the damage the fruit flies inflicted on the crops while ensuring this grade was retained.

This collaboration between Greenwood Orchards and Advance Computing is just the beginning.

The next phase for Advance Computing with this project is to introduce a level of automation so photos are automatically taken and uploaded when flies enter the bio-traps, and for Cortana-powered image recognition to be able to classify the flies as their images are uploaded.

Before that can occur, however, the company is hoping to increase the use of the connected bio-traps in their current configuration for data gathering purposes.

“The first stage is to get it into people’s hands and to start getting some more data and insights,” he explained.

“The second part of that is to complement that data with automated traps in the future so we can start feeding the data straight into our cloud platform.”

Peter Gutierrez visited Greenwood Orchards in Merrigum as a guest of Microsoft.