Technology could save health system $3 billion a year. 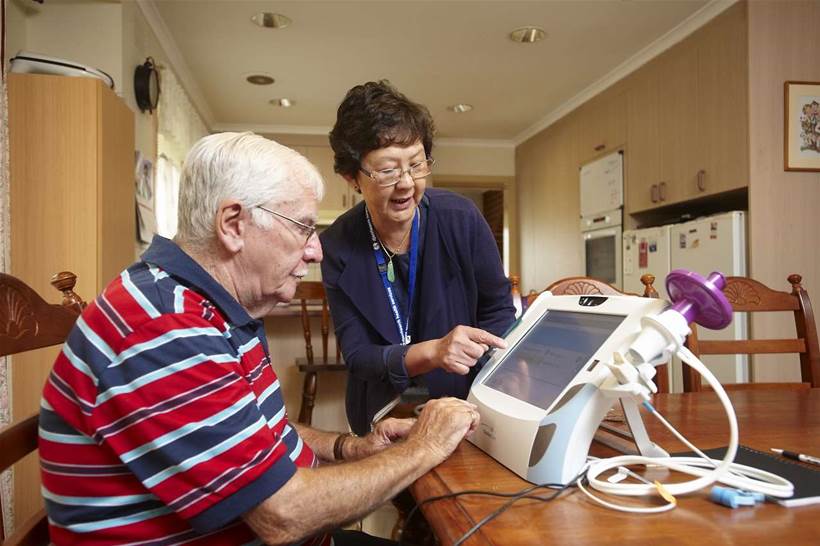 Telehealth nurse showing a patient how to use the home monitoring system. (Source: CSIRO)

The use of telehealth systems and technologies to provide patient care have long been touted as a solution to ease the burden on Australia’s health system, and a recent study completed by the CSIRO has provided the most compelling evidence yet of their benefits.

The 12-month trial was conducted in conjunction with a number of partners and involved trialling telehealth systems with 287 patients.

Participants were provided with a telehealth device that included videoconferencing capabilities with clinicians, messaging features and the delivery of clinical and study-specific questionnaires.

Depending on the conditions the patients had, the devices monitored their ECG, heart rate, spirometry, blood pressure, oxygen saturation, body weight and body temperature, and glucometry were also deployed.

Over the course of the trial, the study showed savings of 24 percent to the healthcare system, due to the reduction in number and cost of GP visits, specialist appointments and procedures performed.

These reductions could potentially lead to a saving of up to $3 billion a year to Australia’s healthcare system, according to CSIRO.

Dr Rajiv Jayasena was the lead researcher in the trial and he spoke to IoT Hub about the trial.

“It was a trial that started as part of the telehealth pilots program, and its goal was to understand how we can deploy telemonitoring for aged care and for chronic disease management, and how it could be scaled up into a sustainable, large-scale model,” he said.

Jayasena said that it was important to select technologies that were already available and had support from local research and development groups.

“We wanted devices that were medical-grade, well calibrated and accepted within the healthcare industry, and readily available to the patients,” he explained.

He added that it was important for the technologies used were capable of monitoring multiple conditions, as this was often the case for the patients that were participating.

“The device we selected was something that sat on a table, had a touchscreen with large icons and was easy to learn and use, and we also trained the participants in the use of the technology,” he said.

What did the study uncover?

Jayasena said that there were a number of interesting findings from the study, particularly in the area of primary health care utilisation, which include GP and specialist visits, lab tests, and other procedures.

These findings amounted to a general reduction in the number of GP and specialist visits, tests and procedures performed on the patients during the trial.

“We also looked at hospitalisation rates and the trajectory during the trial compared to the group before the trail,” he said.

“More importantly, we saw a change in the length of stay in hospitals for the patients, with these durations falling significantly.”

Jayasena also observed a change in behaviour and mentality when it came to their healthcare.

“What we saw was that patients became more in control with the management of their conditions, they learnt how to manage particular situations better, they knew when to take extra care if they were having a bad day health-wise, and also to call the nurse or GP instead of feeling anxiety by going to a GP,” he said.

Jayasena said that the use of telehealth technologies particularly among older patients is important in giving back to them a level of independence when it comes to their well-being.

“Every patient that I’ve seen who had taken up telemonitoring services during the trial have been really reluctant to give them up, because they recognise that it’s the way of the future,” he noted.

Jayasena said the telehealth systems were well-received and praised by the healthcare professionals that assisted during the trial.

“We had good acceptance by the clinicians, with 89 percent of the clinicians said they would recommend these telemonitoring services to other patients,” he said.

“The technology helped them keep track of what procedures were done in the past, get access to reports that would otherwise have been hard to obtain, and reduce the travel to people’s homes.

“The clinicians thought this enabled them to effectively manage more people proactively, rather than in the reactive sense.”

Jayasena said that the benefits of telehealth systems extended beyond the immediate state of the patients, and helped with trend analysis of chronic conditions.

“Chronic diseases cause patient health to deteriorate slowly - it doesn’t happen overnight. So if telehealth systems can catch the deterioration early, it can prompt earlier intervention,” he explained.

“That might mean something as simple as a visit from the nurse, but this would be much better than the patient going to the hospital, costing the healthcare system a lot more money.

“For the patients themselves, it’s fantastic that they can stay in their own home and be taken care of, rather than having to run to the hospital.”

“There are challenges for the providers. What we see is that most of the time when there are revolutionary changes in care delivery, it’s the provider network that needs to embrace it,” he said.

“The patients are already in a position where they want to embrace technology to help them manage their health.

“There’s still a need for cultural change, and that became evident in some of our trial sites, so there are more education and acceptance mechanisms needed to enable the widespread use of this kind of technology.

“I think the healthcare system is ready to embrace telehealth, and while the delays caused by change management will still be there, I believe they will reduce over time.”