How extreme sailing uses analytics to stay on course 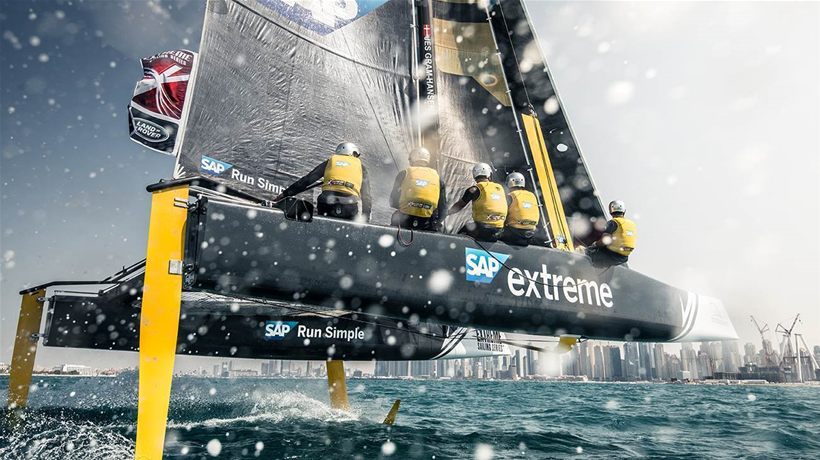 The Extreme Sailing Series (ESS) has evolved over the past ten years to become the premiere inshore sailing event for sailing teams and spectators alike, and data analytics has played a pivotal role in its success.

Data analytics giant SAP is the official technical partner to the racing series, and also sponsors the SAP Extreme Sailing Team, one of the participants.

Milan Cerny, technology and innovation lead at SAP Global Sponsorships, spoke with IoT Hub about how its partnership with the ESS has helped to provide data insights for the teams and to enrich the spectator experience.

“A key factor within the partnership is our technology showcase called SAP Sailing Analytics – something we originally started to develop in 2011 in collaboration with Kieler Woche in Germany, one of the world’s biggest sailing regattas,” he said.

“[Our partnership with ESS] provides us with the opportunity to develop our SAP Sailing Analytics in close collaboration with sailors, coaches, fans, media and event organisers, who all benefit from getting new and useful insights into their sport.

“With the help of our software, sailors and coaches can analyse and improve their performances, event organisers are able to run their events in a more efficient way, and fans and media are able to get simple and fast access to information, which ultimately helps make the sport more tangible and accessible to a broader audience.”

What technologies are used?

Cerny said that location data is collected from the boats and buoys which define the course for the competitors via GPS sensors.

Furthermore, this year saw the introduction of new GC32 boats, and SAP was able to deploy another sensor module to each new catamaran, providing information about the ride height, acceleration, heel and pitch in real-time.

“All this data is being processed in-memory and live, so we can provide a live virtual picture of the race action to the audience on shore and anywhere in the world,” Cerny said.

“All races are also available for replay, so sailing teams can deep-dive into their performance, learn from their mistakes, refine their strategies and get better in the future.”

Weather – particularly wind conditions – is a crucial component to sailing, and Cerny said that wind measurement devices are also deployed in the water during racing.

“These units – similar to the sensors on the boats and buoys – submit their readings in real-time to our cloud systems, where they are processed and combined with all other data points to provide a comprehensive understanding about the wind direction and speed on the race course,” he said. 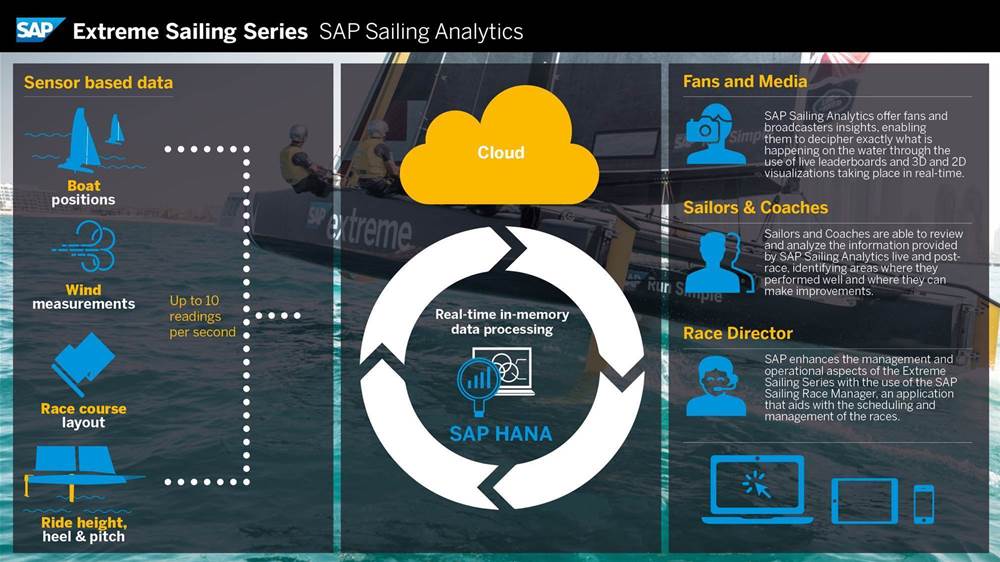 The intricacies of data collection in sailing

Unlike other sports which occur in an enclosed space or in a smaller area such as a stadium, a typical ESS race will take place across the harbour of a major city, which provides unique challenges when it comes to data collection, according to Cerny.

“In order to collect the data from the race course, including boat positions, race course layout, wind information and foiling data, all sensors use 3G mobile data connections in order to communicate with our cloud systems,” he explained.

“In an environment which is very much exposed to various weather conditions, this is a key concept we have developed over the last few years, and at each even we are running our own ‘Internet of Things’ network with a number of electronics devices communicating to each other automatically and in real-time.

“Our most recent challenge is leveraging the data coming from the new foiling sensors, which add a new dimension to analysing sailing with the boats now also moving vertically out of the water, which has a tremendous impact on their performance and handling.”

Like other racing sports, large datasets also pose a challenge, and obtaining context and insight remains a key focus.

“Making the data and information accessible and understandable is the area where SAP Sailing Analytics makes a real difference to the sport of sailing,” Cerny said.

“We collect huge amounts of data, simplify access and put this data into context, so both sailors and the audience can make sense of it, understand what is going on and gain more insights.”

What does the future hold?

Cerny sees even more data being collected in the future, and virtual or augmented reality playing a role.

“Moving forward, it is possible to attach more sensors, such as devices giving information about the sailors’ vital functions, for instance, or sensors measuring the boat settings themselves, like the adjustment of the foils,” he explained.

“This will ultimately benefit the audience as well, as it will provide even more insights and transparency and take the simplification of sailing a step further.

“Virtual or augmented reality comes into play as well. Transporting the excitement and emotion of this sport to a large audience is absolutely key for us as well as the event organisers, and putting a spectator virtually closer to the action and combining that with the power of SAP Sailing Analytics by adding context to it could be a huge step forward.”