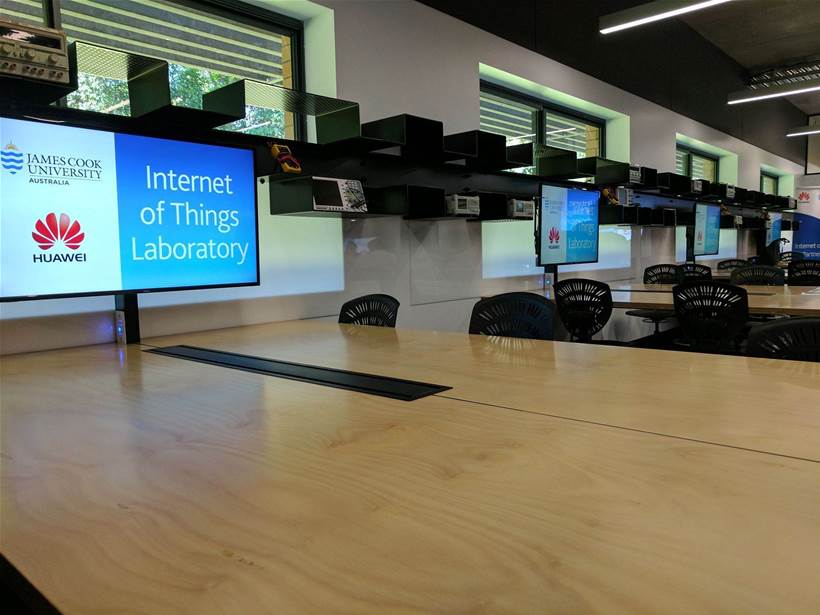 Situated at JCU’s Cairns campus in far North Queensland, the research facility consists of a teaching laboratory and workshops, and is designed to encourage students to build practical solutions to real-world problems using the recently ratified NB-IoT standard.

Huawei has supplied the university with NB-IoT-ready base station infrastructure, along with direct funding for the multiple research streams that will be pursued.

The opening of the facility follows last year’s launch of the first IoT-specific degree available to university undergraduates hosted by JCU – the Bachelor of Engineering in Electronic Systems and the Internet of Things.

With students from this course having access to the new facility for the first time this week, they will combine the study of electronic engineering with internet technologies, wireless communications, sensor devices, industrial design and cloud computing.

Huawei is also offering selected JCU students the chance to travel to the company’s global headquarters in China and its Australian headquarters in Sydney, as part of its ‘Seeds for the Future’ program.

Professor Harding said: “It’s a wonderful thing to imagine what we can do when we offer a program of this type in a location like northern Queensland, and understand that this sort of innovation, research and development - and the preparation of the professional class that we need to see through to maximise the utility and the benefits that this technology is going to give - can be done here, rather than being confined to the big cities down south.

“I know that JCU’s students and staff, with their own interests and skills, are very eager for this sort of development, and I have every confidence that what happens in this laboratory is going to make a tremendous difference, not just to our local communities, but to communities worldwide.”

Lord added: “The IoT lab at JCU will be a living campus, and allow students, researchers, academics, and perhaps our colleagues in industry to use the latest globally approved IoT technologies to develop and test their ideas.”

“These ideas are going to change the way our cities work, our hospital systems, our transport systems, the way we monitor cattle across northern Australia.

“The beauty of this laboratory is that it’s globally recognised as adhering to the NB-IoT standard, so any progress here at JCU can be taken out to the world.”

IoT in the first degree

A cohort of approximately 80 students at JCU will be the first to make use of the IoT research facility as part of the Bachelor of Engineering in Electronic Systems and the Internet of Things, and the degree will be spearheaded by Professor Wei Xiang, the foundation professor and head of discipline for the course.

IoT Hub sat down with Professor Xiang during today’s launch, where he expressed his excitement at the prospect of exposing his students to the latest technologies in the world of IoT, thanks to the partnership with Huawei.

“We are extremely excited about this new partnership, because what Huawei brings us is the industry’s most cutting-edge NB-IoT equipment, which is very expensive and so new that you can’t even purchase it on the market,” he said.

“We’re not only teaching students theoretical concepts, we’re giving them access to the new industry standard, so while the financial contribution from Huawei is important, the access to resources from an educational perspective is far more valuable.”

Xiang said that it was important to tailor the degree in such a way that it was applicable for students in the area and the pressing issues that the local region faces.

“We need to play into our traditional research strengths like marine science, rainforest monitoring, and so on, and we also have to cater for the local community in terms of the national agenda, where we’re transitioning from the mining boom to a knowledge-driven economy,” he explained.

“This offering doesn’t just link with our traditional strengths at JCU, but also provides economic stimulus, creating job opportunities and fostering a culture of innovation for the local region and its youth.”

Being the first university to offer an IoT degree, Xiang did not have a lot to work with in terms of local reference material when designing the curriculum.

Instead, he looked overseas for his inspiration.

“We looked at universities in Europe, China and the US to see how they offered IoT engineering degrees,” he said.

While Xiang could have easily replicated the courses provided overseas, he chose to design a curriculum that differentiated it from offerings abroad.

“One of the selling points of our IoT curriculum is we’ve struck a very good balance between the software skills and the hardware skills,” he said.

“Unlike traditional IT, which is very much software-driven, or traditional electronic engineering that focuses on hardware, we teach students both skill sets.

“Plus, part of the curriculum contains cutting-edge material, like big data analytics and machine learning, because we believe that IoT – more than simply collecting data – is about what happens in the upper layers, where the data gets processed.”

Peter Gutierrez attended the launch of the NB-IoT research facility in Cairns as a guest of Huawei.