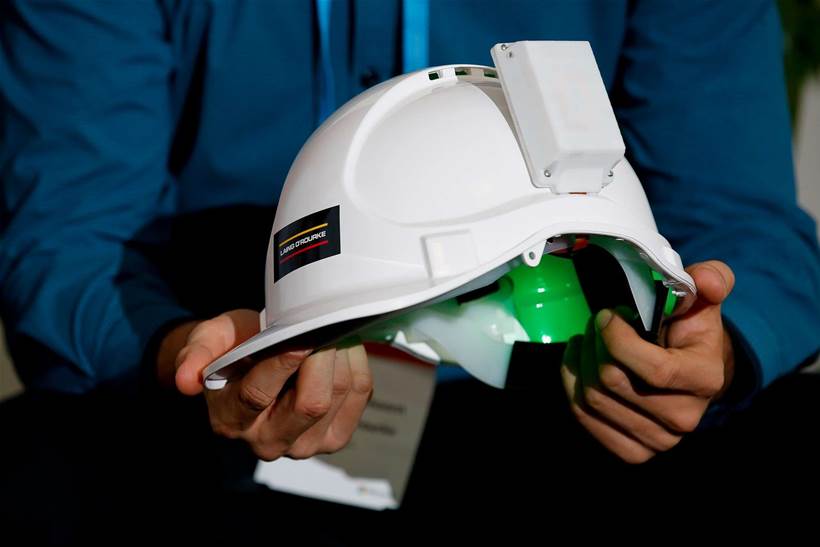 International builders Laing O'Rourke have fitted sensors to a hard hat to allow them to monitor employees’ health on construction sites.

Partnering with software house MOQdigital, Shepherd’s team created a "smart hardhat" that was unveiled at Microsoft’s Ignite conference on the Gold Coast.

Equipped with a sweatband sensor array that measures the heart rate and and temperature of the wearer, along with an accelerometer for orientation and shock, the smart hardhat also contains a global positioning system (GPS) device to track location.

Ambient temperatures and humidity are also collected and sent to a central gateway with the low-power Zigbee protocol, using a radio.

“Data is stored locally on the hardhat too in case it cannot send it to the central gateway”, Shepherd said.

From the central gateway, the data collected is forwarded to into Microsoft’s Azure cloud, and analysed with the Power BI platform using 3G cellular data links.

Prior to the cloud storage, the data was put into and analysed in large spreadsheets, a process that was cumbersome especially if the 3G access wasn’t reliable, Shepherd explained.

The data collected enables Laing O’Rourke to monitor the health of construction gangs, and alert supervisors if they for instance have been in the sun too long, or if an individual is about to suffer heatstroke.

“We want to be out of the reactive space, especially for things like heat stress, for health and safety management,” Shepherd said.

Mick Badran from MOQdigital said there were several challenges in designing the device.

“Some workers did not like the fact that the module for the monitoring electronics took up a utility slot on the hardhat. These are used by workers for ear defenders, and their guys were asking, ‘How do we wear them now?’, he said.

Making sure the equipment could withstand harsh conditions on building sites and avoiding call-outs for support were other issues, Badran said.

There’s also the pricing, which Laing O’Rourke is aiming to keep at or below A$100 per hat, and the fact that it has to be a separate device and not integrated in the headwear itself, so as not to make it necessary to enter into specialised manufacturing deals for the protective gear.

Microsoft’s general manager of data platform and IoT management, Barb Edson, said the key advantage Laing O’Rourke found was that they were able to realise the project much faster by using the Azure IoT Suite product.

When Laing O’Rourke and MOQdigital approached Microsoft, the project had been in the works for two years.

Edson said that with Microsoft’s help, it was prototyped and ready for trials in a matter of months.

Shepherd said leveraging Microsoft’s massive investment in research and development meant Laing O’Rourke didn’t have to spend the money and build large teams, a process that might have taken years to accomplish.

The engineering firm is now looking at further leveraging what it has learnt from the smart hardhat project, and are in talks with other parties so as to extend it to other industries.

Juha Saarinen travelled to Microsoft Ignite as a guest of Microsoft.