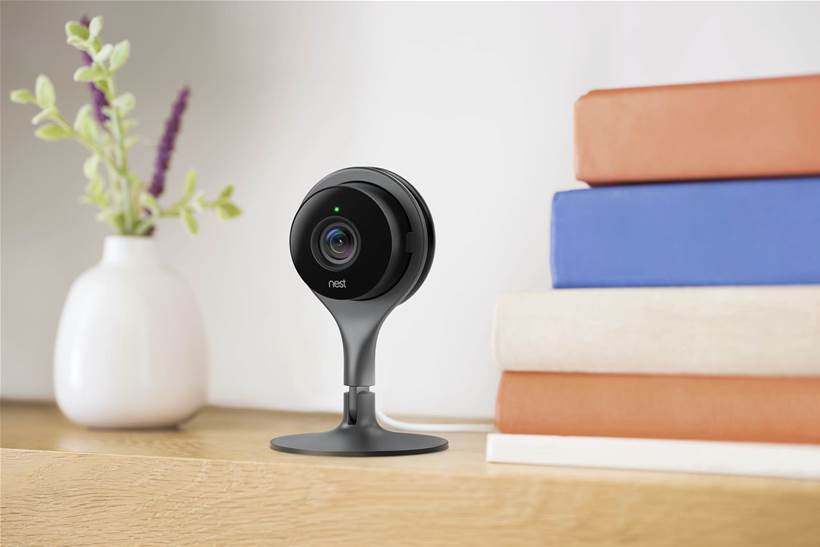 Nest, the US smart home technology company now owned by Google, has introduced a range of products into Australia, but not its best-known device – its thermostat.

On sale from today are the company’s smart fire alarm and smart security cameras. The fire alarm is available in mains/battery powered versions and battery only. The camera (pictured) is mains-powered and available in models for installation indoors or outdoors.

Australia becomes the 13th country in which Nest has launched its products.

Initially at least, Nest products will be available online only from product and service comparison web site iSelect.com.au through its new Life Admin store. They will be available stand-alone or in bundles with services from a range of iSelect’s energy and telco partners such as Optus, Sumo Power and Mate Communicate.

Nest says bundles with home loans, home and contents and health insurance will be offered over the coming months.

Maxime Veron, director of product marketing at Nest, told IoT Hub: “We chose iSelect because their core competency is to know things about your home and your life events and to offer thing to help you with those.” He declined to say how long iSelect’s exclusivity would last.

Veron said Nest’s market research had indicated a very limited market for the thermostat in Australia. “Our thermostat is compatible only with central heating and cooling systems. There is zero market for it in Sydney. There is a very small market for it around Melbourne and that is pretty much it.”

Introducing thermostat ‘where it makes sense’

“We are working on how to introduce our thermostat in those few pockets where it makes sense,” he said.

Veron told IoT Hub the company did not offer a battery powered camera because these could take so long to wake up from standby and start transmitting that they could miss vital imagery. By way of demonstration he showed a video of someone’s ute being stolen from their driveway, but all the battery camera caught was the tail end of the ute disappearing.

According to Nest, its camera looks for motion or sound and sends an alert when it sees something conspicuous. “Night Vision illuminates the whole scene. And with the Nest app, you can control and watch live in 1080p HD from anywhere 24/7.”

Having a mains-powered camera also enables Nest to offer a continuous recording service where the 10 most recent days of imagery from a camera are stored in the cloud and can be accessed by the homeowner.  This service costs $14 per month. The indoor and outdoor cameras each cost $319.

The smoke alarm costs $189 for either version. It also detects carbon monoxide, which according to Nest kills over 300 people every year in Australia. Nest fire alarms are networked using the Thread wireless mesh technology so that if one detects smoke all the others in the home will issue a verbal alert.

The alarm is also able to differentiate between slow and fast burning fires. According to Veron, decades ago it used to take about three minutes for home fire to really take hold, but modern furnishing materials have reduced that to as little as four minutes.

It is also fitted with a humidity sensor to enable it to differentiate between smoke and steam, which normal photoelectric smoke alarms like Nest’s are unable to do. Some models sold in Australia that use a radioactive isotope are able to make this distinction.

The light ring on the alarm also lights up at night if it detects motion, illuminating the path through the house.

One thing Nest does not offer is a central hub or platform to control its devices. All are equipped with WiFi and, via the home’s WiFi and internet connection, communicate to the Nest cloud and to the smartphone app.

“We don’t believe customers shop for a platform. We believe they shop to solve a pain point one product at a time,” Veron said. “However, our Works with Nest cloud API platform has 30,000 developers and over 130 product integrations. Through the cloud you can bridge with other ecosystems and other platforms such as Amazon Alexa, Google Home, control4. All integrate with Nest.”