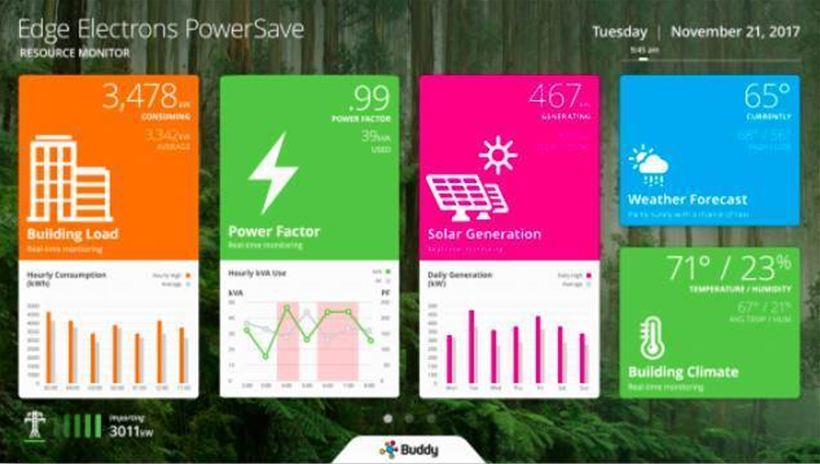 The deal means that the performance data from Edge Electrons’ PowerSave products will be able to be fed into Buddy Platform’s cloud-based software and monitored by users on the Buddy Platform console.

Buddy says its platform enables organisations to analyse data from an loT device then make that data actionable, in real time, using their existing business intelligence M2M and other systems.

According to Buddy Platform, “By visualising PowerSave data through [our portal] Ohm View, building and sustainability managers will gain much easier access to this data, as well as new insights and learnings about their energy usage over time.”

Also, Buddy will sell the PowerSave as an add-on feature to the Buddy Ohm product suite, initially in Australia and later in the overseas markets where it operates.

According to Edge Electrons, “PowerSave is a power factor correction product that helps to reduce the maximum amount of energy required at any one point to run appliances and equipment. By reducing the maximum energy required, the network demand charge is reduced, helping businesses save up to an additional 20 percent off their energy bills.”

The need for power factor correction

The current and voltage of alternating current power systems are delivered in phase and for a purely resistive load, such as a heating system, remain in phase. However the voltage and current across a largely inductive load, typically an electric motor or a transformer, can be significantly out of phase.  This means the real power delivered is less than the apparent power, on which the charge is calculated

Power factor correction equipment such as PowerSave consists of banks of capacitors: the phase shift between current and voltage across a capacitor is opposite to that across an inductance, so by choosing the appropriate capacitive load the phase difference between voltage and current can be eliminated.

The PowerSave is a “globally-patented” device that makes use of “software-driven capacitors”,  according to Edge Electrons.

It also provides protection from ‘dirty power’: abnormalities such as surges or drops in supply voltage that can be caused by heavy loads being switched on and off, and high frequency signals superimposed on the mains voltage, introduced by electronic devices such as switch mode power suppliers.

Edge Electrons says it has supplied its systems to a wide range of customers in Australia such as schools, five star hotels, manufacturing plants, golf courses, clubs and service stations. It has also deployed products in New Zealand and South East Asia and says it is preparing to expand into the North American and European markets.