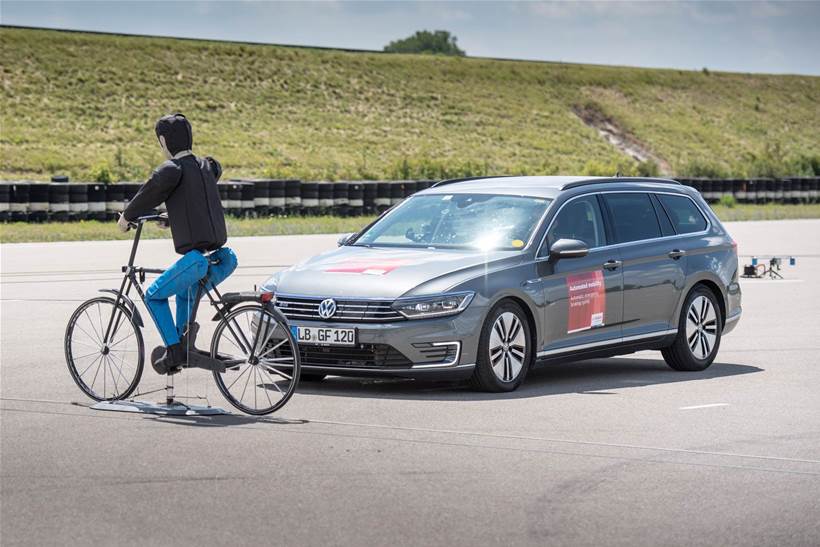 Truly autonomous vehicles that roam the streets unaided, collecting and depositing passengers on command, might be many years away, but the component technologies are already being deployed in production vehicles and will progressively make driving easier and safer, according to vehicle electronics systems manufacturer Robert Bosch.

Bosch has announced a new emergency braking system with cyclist detection saying it is able to identify a cyclist, compute that a collision is imminent and apply full braking within 190 milliseconds.

Bosch cites Australian Bureau of Infrastructure, Transport and Regional Economics figures showing that cyclists make up three percent of road fatalities and 15 percent of road hospitalisations and says equipping every car in Australia with an emergency braking system able to detect cyclists could prevent many of these accidents, or at least mitigate their severity.

Bosch board of management member Dr Dirk Hoheisel says such driver assistance systems are the next step along the path toward accident-free driving.

“These electronic assistants are always vigilant and, in emergencies, they respond more quickly than people can. They provide support just where drivers need it – in busy city traffic,” Hoheisel said.

A Bosch survey found that 52 percent of new cars sold in Germany have at least one driver assistance system on board, and Bosch says the trend is toward consolidating multiple assistance functions on one sensor.

“Sensors supply increasingly precise images of the car’s surroundings, and their interaction with actuators, such as braking and steering, is steadily becoming faster and more efficient,” Bosch said in a statement. “In this way, driver assistance systems are not only preparing the path toward automated driving, but are already delivering stress-free and relaxed driving.”

Another new safety function the company has developed is designed to reduce accidents caused by opening car doors at the wrong time. “Mounted to the left and right of the rear of the car, the Bosch sensors monitor traffic,” the company said.

“Within a 20-metre radius the sensors can detect other road users who are approaching from the rear, or who are already to the side or rear of the car, and promptly warn the driver before they open their door.”

Although Australia no longer has any car manufacturing, it has the Australian Driverless Vehicle Initiative whose stated goal is “to build momentum by rapidly exploring the impacts and requirements of this new technology in a truly Australian context and making recommendations on ways to safely and successfully bring self-driving vehicles to Australian roads.”

The organisation claims a membership of 100 leading organisations across a wide range of sectors and to “offer a unique opportunity for government to collaborate with industry and researchers, to position Australia and New Zealand amongst the world leaders in the development and deployment of driverless technology.”

It promises to raise public awareness through live demonstrations involving government, industry, research entities and the media, “to provide an avenue to showcase the involvement and contributions of collaborating partners involved in this important initiative.”

The organisation will hold its second International Driverless Vehicle Summit in Adelaide on 16 and 17 November.