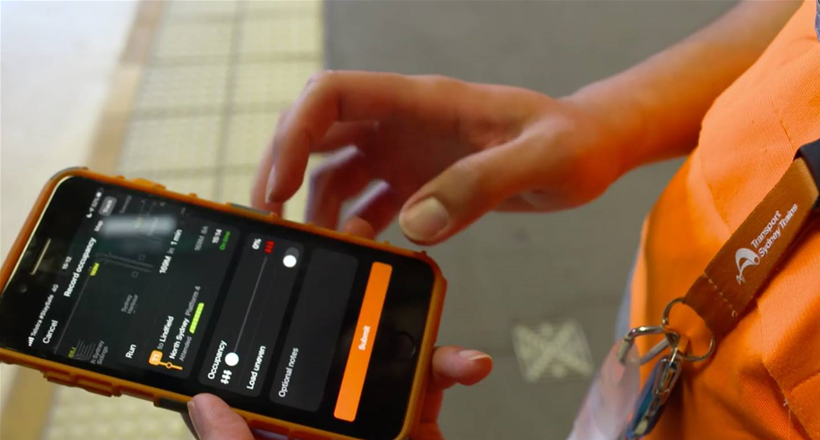 A new app that allows Sydney Trains staff to report crowding on services has been rolled out in a bid to improve the flow of real-time occupancy data on Sydney’s rail network during COVID-19.

It was developed by Sydney-based company AppJourney, which is also responsible for the customer travel app NextThere, over a single weekend in early May in preparation for the easing of restrictions.

The app will be used by Sydney Trains’ equally new social distancing squad, which was revealed by Transport Minister Andrew Constance as the rail network’s new “eyes and ears” on Tuesday.

The majority of the 80-strong team will be positioned across 30 of Sydney's busiest train platforms at 25 stations to combat crowding, while 20 monitor passenger movements from the Rail Operation Centre (ROC) in Alexandria using the network’s 11,000 CCTV cameras.

A TfNSW spokesperson told iTnews the 60 staff positioned on the network’s business platforms will use the app to report “live loading data” to the team of 20 in the ROC to “allow operational decisions to be made in real-time like never before”.

The real-time data, which will be entered by staff from a large number of locations simultaneously, will also be available through the MyStation portal used by frontline staff at stations.

A video released on Tuesday shows a staff member using the app to report occupancy data from one of Sydney’s Waratah trains using a percentage toggle to reflect estimated occupancy.

The app also displays the occupancy data collected from in-build sensors under the axle of each Waratah train for comparison, and allows the staff member to submit notes with the form.

Given the data collected from in-build sensors under the axle of each Waratah train is only collected every ten minutes, the app will significantly improve the flow of data to the ROC, as well as passengers.

This will be particularly usually for busy city stations, which are often only one or two minutes apart.

There is also currently no real-time data available for older rolling stock, including on C or K sets - which are more than 35 years old - or Tangaras, to allow passengers to pre-empt crowding.

In addition to weight data, which was recently updated to reflect new occupancy limits on public transport service, data reported through the app is also combined with real-time data from the Opal network.

“Some of the systems we have developed are world-firsts and provide customers with smarter data than ever before so they can make more informed decisions around which services to catch,” the spokesperson said.

While the app was “briefed, created and delivered over a single weekend” in response to the need to monitor crowding during the pandemic, it is based on an iPhone-based “customer boarding assistance application” that was first trialled during the 2018-19 financial year.

According to Sydney Trains’ latest annual report, the app - which launched in the second half of last year - was developed to improve “the timeliness and accuracy of information provided to frontline customer services staff to better assist less mobile customers on and off the train”.