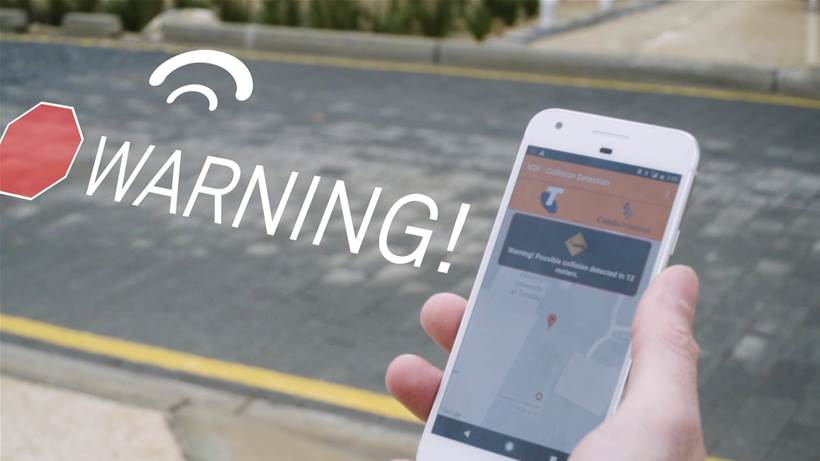 Telstra and Adelaide-based Cohda Wireless say they have successfully tested Cohda Wireless’ collision avoidance technology over the Telstra 4G network to warn of potential collisions between cars and cyclists, and cars and pedestrians.

According to Telstra, the trial demonstrated vehicles interacting directly with pedestrians’ and cyclists’ mobile phones providing early-warning collision detection and alerts via an app installed on their mobiles.

“The technology was tested using some common scenarios that occur every day in Australia – a car and a cyclist approaching a blind corner, a car reversing out of a driveway, and a car approaching a pedestrian crossing,” Telstra said in a statement.

The demonstration was an example of vehicle-to-pedestrian (V2P) communications, a subset of the vehicle-to-everything (V2X) category, along with vehicle-to-vehicle (V2V) and vehicle-to-infrastructure (V2I).

In October 2016, Telstra and Cohda Wireless announced their first trial of V2I technology over Telstra’s 4G network. Telstra’s director of technology Andrew Scott said at the time that the trial marked the first phase of Telstra’s plan to show how V2X technology could be supported on its 4G network.

“While there has been a lot of focus around future transport technology, there has not been much work done to date in Australia on supporting intelligent transport systems via existing 4G mobile networks. The trial we just completed in South Australia confirms that 4G can support V2I application,” Scott said.

“These applications included alerting a driver to roadworks ahead, giving green light priority to high priority vehicles, and testing optimal green light timing where the vehicle is informed of the optimal speed to approach a traffic light so that that they get a green light when they arrive, therefore allowing a more continuous flow of traffic.”

Cohda Wireless was founded in 2004 by a group of scientists working at the University of South Australia's Institute for Telecommunications Research. Its initial focus was using software and a variant of Wi-Fi, now standardised as 802.11p, to communicate between nearby vehicles to warn drivers of impending collisions.

In 2011 it participated in the first trial of that technology in Australia using 10 vehicles in Adelaide and the following year was selected for a year long trial with 3000 vehicles being undertaken by the US National Highway Traffic Safety Administration (NHTSA).

Since then it has achieved a number of commercial successes for its technology, the most recent in May when it announced that its Dedicated Short Range Communications (DSRC) technology would be standard in every 2017 model Chrysler CTS sedan sold in the US and Canada.

“The Cadillac CTS uses the Cohda-based DSRC solution and GPS to transmit and receive as many as 1000 messages per second from other vehicles as far as 300 metres away,” Cohda said in a statement.

“This provides the car with ‘360-degree awareness’ by gathering and synthesising data from sensors on nearby vehicles and roadside infrastructure to detect hidden threats by extending the horizon of awareness beyond what the driver can see.”

Telstra was one of the recipients from the first round of the South Australian Government’s $10 million Future Mobility Lab Fund, to boost local testing, research and development of connected and autonomous vehicle technology.

Also, Telstra, Cohda Wireless and the South Australia Department of Planning, Transport and Infrastructure are all partners of the Australian Driverless Vehicle Initiative (ADVI), a partnership of government, industry and academic partners working collaboratively to research, investigate and help inform the development of national policy, legislation, regulation and operational procedures and processes to bring driverless vehicles to Australian roads.