How Environmental Monitoring Solutions can manage your local servo. 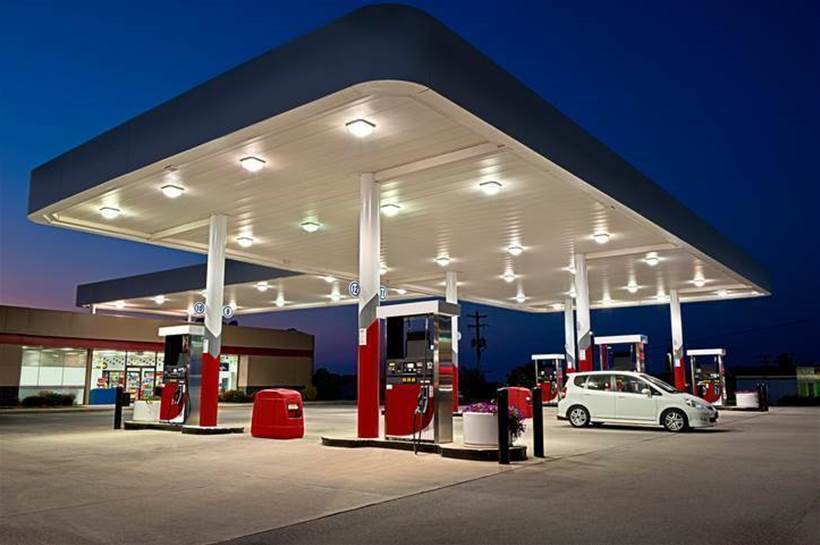 Australian company Environmental Monitoring Solutions (EMS) has turned to the Internet of Things and cloud computing to create a device platform that simplifies petrol station management.

EMS and development partner DiUS have created a site data aggregator called ‘FuelScan’ which can monitor the petrol pumps and communications that occur between the pumps and the 150,000 litres of product housed in underground storage wells at a typical petrol station.

The device can ‘listen’ to the communications between the wells and the pumps using a variety of methods, including magnetosensors to perform Hall effect sensing (sensing of magnetic fields), direct connectivity into the current loop between pump and tank, and also via optic fibre sensors that monitor LED activity.

This allows petrol station owners and operators ensure that the amount of fuel dispensed at the pump is accurate, and provide greater visibility and control over fuel inventory.

What makes EMS’ aggregator unique in the industry is it provides real-time visibility of a petrol station’s tank and pump system, via LTE connectivity to the AWS cloud.

FuelScan is also able to connect to EMS’ FuelSuite cloud platform to provide petrol station owners and operators real-time analytics of their pump and tank operations.

EMS managing director Russell Dupuy told IoT Hub on the sidelines of the AWS Summit in Sydney that FuelScan is the culmination of a five-year journey with its customers to move to unified real-time operations, who often were burdened with multiple legacy and proprietary technologies.

“When we started looking at retail service stations five years ago, we found that they typically have around five different technologies,” he explained.

“Some technologies were proprietary, some were not. Some have reverse-engineered each other, and in many of those cases, not particularly well.

“What we wanted to do was connect to the petrol station assets in a native way, such that we didn’t have to work through multiple protocols, which is what our competitors where doing at the time.”

Prior to the creation of FuelScan, a petrol station’s Automatic Tank Gauges (ATGs) would be polled directly by EMS’ Fuelsuite.

The problem was that if the petrol station expands (or scales back) its operations to add or remove pumps, or changes its pumps completely, then the Fuelsuite configuration for that station would require amendments as well.

Furthermore, ATGs would only be polled at certain intervals, which means data was not real-time.

FuelScan eliminates those issues by aggregating the data across all tanks and pumps regardless of configuration and manufacturer, and providing a real-time feed of fuel levels and usage into Fuelsuite.

While many manufacturers of IoT data aggregators and gateways are pushing for more computing power ‘at the edge’ to enable edge processing and minimising data upload to the cloud, this wasn’t an option for EMS due to the industry’s history of reverse-engineering legacy systems, according to Dupuy.

“We decided to make the device as unintelligent as possible, simply because if someone picked it up and reverse-engineered it, we wanted to make it as difficult for them as possible,” he said.

“There is a certain level of intelligence and firmware on the device, but it’s only limited to what is actually needed.

“We just felt that distributing the processing capabilities we created had more commercial risk.”

Another reason for the lack of edge processing capability is EMS’ view that as the analytics they perform for their customers evolves, any changes could be better managed in the cloud, rather than having to deploy over-the-air firmware updates to each FuelScan device in the network.

“We also wanted to manage users’ access level of on-board functionality based on the commercial agreements they had with us, which is easier to do in the cloud,” Dupuy added.

“We might have clients that will subscribe to certain services but not others, so that was another one of our considerations.”

Dupuy said that FuelScan will have some sort of edge capability in terms of maintaining functionality when cloud connectivity fails, but this component is still in its early stages of development.

“This functionality wasn’t part of our initial plan for the device, but we’ve had one client say they wanted high criticality notifications at all times,” he said.

“So we’re developing an algorithm that will reside on the device that can send push email notifications directly to users instead of routing through our cloud infrastructure.”

EMS is currently in the midst of a 12-site trial which commenced in late January with a major petroleum wholesaler.

According to Dupuy, the plan is to perform a 1000-device rollout across the wholesaler’s petrol station network in October this year for a six-month pilot of the aggregator.

“AWS will work with us on the pilot to look at all the data analytics and help us understand the investment model” he said.

“One of the key things we need to consider is not just the NRE (non-recurring engineering) costs, but also ongoing costs to maintain this service for our customers.

“We deal in a mature market and they don’t like new costs, so we have to decide if we absorb the new costs, pass them on, or find ways to value-add, giving our customers reasons to pay more.”

Dupuy also has plans to take the device global, to markets such as South East Asia, the United States, and Europe.

He said that while he considers EMS to be the “David in a group of Goliaths”, he’s on the lookout for a strategic partner that can help realise the company’s vision and enter a market that contains an estimated 700,000 to 800,000 petrol stations worldwide.

“We want a strategic partner that feels that our technology is complementary to their business, probably someone operating in our industry,” he explained.

“There are a few conversations currently occurring, and we’re looking to partner via joint venture to go to the global market.

“Whilst our biggest competitors might monitor 50,000 petrol stations and we only service 4000, no-one’s got more than about a 14 per cent market share, so there are definitely opportunities out there.”