Takes on other telcos’ IoT platforms. 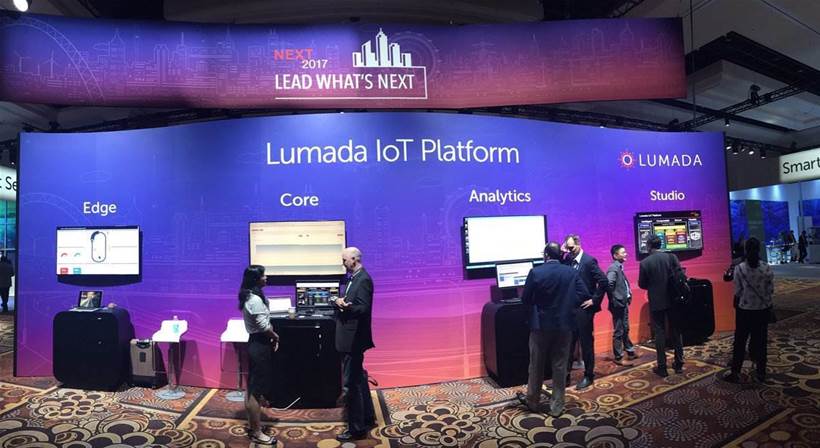 Hitachi Vantara’s Lumada IoT platform on display at NEXT 2017.

The move comes as analysts increasingly highlight the importance of IoT platforms and as BT’s telco competitors such as Verizon promote their own IoT platforms.

Hitachi announced the partnership at its user conference, NEXT 2017 in Las Vegas, shortly after announcing the creation of Vantara and the first fully functional version of Lumada, Release 2.0 (the first version was announced in May 2016).

Rich Rogers, senior vice-president of engineering and product management at Hitachi Vantara, said Hitachi’s intention was that Lumada would be “much more than just another IoT platform in a crowded market.”

The partnership will initially focus on exploring and designing asset intelligence and predictive maintenance solutions for customers in industry sectors such as manufacturing and transportation, Hitachi says. The company expects to have the first outcomes of the collaboration available in Q1 2018.

By 2020, 65 percent of companies that adopt IoT will use an IoT platform for at least one project, according to Gartner’s Competitive Landscape of IoT Platform Vendors 2017.

Global telco Verizon, in its recently released State of the Market: Internet of Things 2017, also talks up the importance of IoT platforms, and its own Thingspace platform in particular. It says the evolution of IoT platforms that offer industry-specific applications and extensive data analytics will streamline the enterprise IoT experience.

“Today’s IoT platforms address head on the complexity and fragmentation enterprises have faced in creating and leveraging IoT applications to realise measurable business value. Simply put, platforms provide enterprises with a quick on-ramp to IoT by bringing together all of the components needed for an IoT solution,” Verizon says.

The telco expects the platform market to grow 35 percent per year to $US1.16 billion by 2020. “Players in the IoT platform market are quickly building comprehensive solutions with most or all of the components that enterprises need to get an IoT service up and running,” it says.

“In the year ahead, IoT platforms will become more and more seamless and streamline the deployment of IoT applications, which will continue to make in-roads into the enterprise. Securely collecting, analysing and integrating data will continue to be enterprises’ most critical concern.”

The author attended Hitachi’s NEXT 2017 event as a guest of the company.