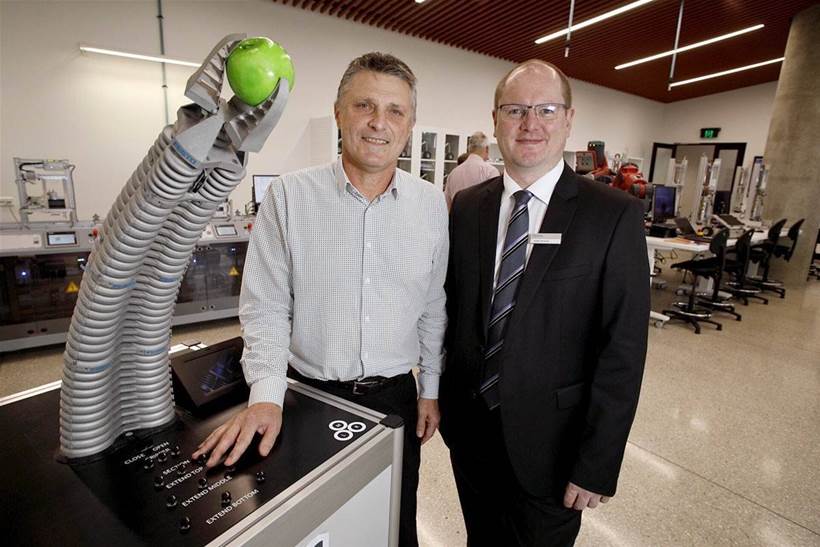 Flinders Professor John Spoehr and Volker Schmid of Festo with the Bionic Handling Assistant at the launch of the Tonsley Manufacturing Innovation Hub.

Finders University has opened the Tonsley Manufacturing Innovation (TMI) Hub, the centrepiece of which is modular future factory to demonstrate Industry 4.0 technologies and developments.

The hub is located in the Tonsley Innovation Precinct (the former site of Mitsubishi's automotive manufacturing in Australia).

The university says the future factory, made in Germany by technology giant Festo, “showcases the latest automation, sensor, monitoring, robotic and cobotic technologies and provides the opportunity for world-class education and training in advanced manufacturing within a research environment.”

The factory includes the Bionic Handling Assistant, billed as “a cobotic gripper arm modelled on the structure and function of an elephant’s trunk.”

The director of the Australian Industrial Transformational Institute at Flinders University, professor John Spoehr, said the TMI Hub would play a catalytic role in promoting the understanding and application of the Industry 4.0 agenda, including robotics and automation in highly networked and flexible cloud-based production systems.

“The TMI will showcase the latest generation of future factory technologies which are revolutionising the way we design and make things,” Spoehr said. “It’s a prime example of how traditional manufacturing is making way for advanced manufacturing in the new economy.

“TMI will play a key role in accelerating the growth of advanced manufacturing by skilling our future workforce, with the adoption of digital technologies in South Australia giving rise to a new generation of manufacturers and highly skilled jobs.

“It will also help organisations to build their i4.0 capabilities through accredited and non-accredited education and training programs.”

The TMI Hub is driven by Flinders University, the South Australian Government and the Innovative Manufacturing Cooperative Research Centre (IMCRC).

The university says it will provide practical training and real-world research opportunities for students, researchers and businesses wanting to learn more about automation, advanced robotics and the Internet of Things.

“It will tap into the work of mature global companies, local enterprises and startups already located at Tonsley including Siemens, Zeiss Vision, ZEN Energy and SAGE Automation, as well as extending its training reach into the State’s fast-growing defence industry and the advanced manufacturing sector nationally,” the university said.

A rival to Swinburne?

Flinders University has given no indication of the cost of its future factory or the TMI Hub but said it was “one of the few future factories in the Southern Hemisphere.”

Another is the one recently opened at Swinburne University with a $135 million industrial software grant from Siemens, announced in August 2017. It is located inside Swinburne’s Advanced Manufacturing and Design Centre (AMDC), opened in July 2015 at a cost of $100 million.

The university said the grant would be used to digitalise its factory of the future, creating Australia’s first fully immersed Industry 4.0 facility.