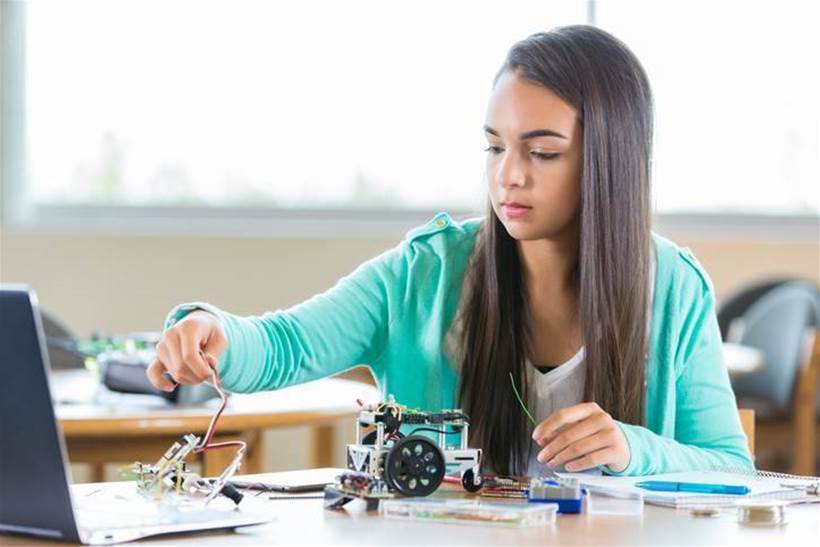 The Internet of Things has been well-publicised and discussed across enterprises and industry, but has not enjoyed a similar level of exposure in schools.

For one school in Sydney, however, this has changed following their participation in the recent AWS Summit in Sydney.

Kim Maksimovic is the IT Integrator at Pymble Ladies College (PLC), a K-12 all-girls school, and was part of the cohort of its senior students to attend the AWS Education Track at the conference.

They were joined by students from other schools including Chatswood High and Northern Beaches Christian School, where they were given the opportunity to develop apps using Amazon Alexa, as well as meet and greet tech industry giants and start-ups.

Maksimovic told IoT Hub that the summit has opened her students’ eyes to what IoT is, and what IoT technologies are capable of doing.

“It’s a dialogue that they haven’t been exposed to, and until today didn’t know much about related concepts like machine learning,” she said.

“For them, it wasn’t just about what learning IoT could do, but rather exposing them to the technical jargon and concepts surrounding it, which will deepen their learning.

“It also lets them analyse how IoT actually works technically and how it can affect their lives, and getting them to participate in activities to see how impactful it can be.

“IoT for them isn’t really a brand new innovation anymore, it’s something that could be used by everybody.”

The school currently has a robotics squad led by STEM (science, technology, engineering and maths) coordinator Dr Kristie Spence, which has found success in inter-school and interstate competitions, according to Maksimovic.

An entrepreneurs’ society has also been established, giving the students the confidence to use technologies in innovative ways, she said.

“What we’re going to do is utilise the design thinking process they’ve learnt at the conference to get them to come up with new ideas – both with and without technology – and get them to bring those concepts into fruition and enter them into inter-school and interstate competitions, like Young ICT Explorers, and so on,” she explained.

“It’s a student-led group, and I’m just one of their mentors, and we’ve got former students and other industry women coming in to mentor the girls, motivate them, and give them more ideas for how their concepts could be applied in a real-life context.”

Having worked for another school which attended the event the previous year and seeing the impact it had on her students there, Maksimovic saw an opportunity for PLC to participate in this year’s event, and said that “it’s really opened the students’ eyes to what the possibilities are.”

“The biggest thing – especially being in an all-girls school – is seeing women role models in technology, which is a really important thing for them,” she said.

“For them to realise that technology affects so many industries in so many different ways, that regardless of what career path they choose, they can be engaged in technology.”

Maksimovic said that the stigma that technology is a male-dominated industry among her students was made all too real as they wandered through the exhibition hall.

“They were walking through the conference in the morning looking at the delegates, and they all said ‘There’s a lot of males here’, and that’s the reality of it,” she said.

“We always spruik those stats to them and say that women in technology is a rarity, and they don’t realise it until they see it themselves.”

Maksimovic said that while using tools to appeal to students’ creative sides had proven successful in PLC, the more technical aspects of technology were gaining traction and popularity at the school as well.

She sees the most success in helping her students identify their career goals and demonstrate ways that technology proficiency could assist them towards those goals.

“It’s about harnessing all those different areas of passion, and saying to them that you can go into something like medical science and still be involved in technology really motivates them,” she added.

“In my role at the school, it’s all about the learning before we talk about technology, so how can we learn and embrace what is available to us in terms of technology to further propel and enhance their learning.

“I also like the idea we heard about failing fast and agile innovation, which is something we talk to the girls about all the time; the growth mindset and being able to fail and learn from your mistakes.”

What does the future hold?

Maksimovic said she has “big dreams” for PLC’s students in terms of their technology education.

“There are subjects in the curriculum such as Information Software Technologies and Software Design Development that really go into the technical aspect of IT.

“But I also want to help students have courage and conviction to try new things like coding.

She said that she wants to eliminate the perception among girls that an interest in technology is something to be ashamed of.

“It’s about not being afraid, embarrassed or ashamed that they’re passionate about technology, and being proud enough of the products they produce that they enter them into competitions and put them ‘on display’,” she added.

“I want to create a culture in the school where all of this is celebrated and embraced.”

Maksimovic added that she hopes that the students that attended the conference will go back to the school and become role models for the younger students coming through and encourage a similar level of enthusiasm for technology.

“We are a technology school, but to show that young women can do many powerful and innovative things with technology needs to come from them,” she said.

“So for them to be able to share their passion and joy for technology is really important in changing the school’s culture around it.”