Partners with Enex TestLabs and Huawei. 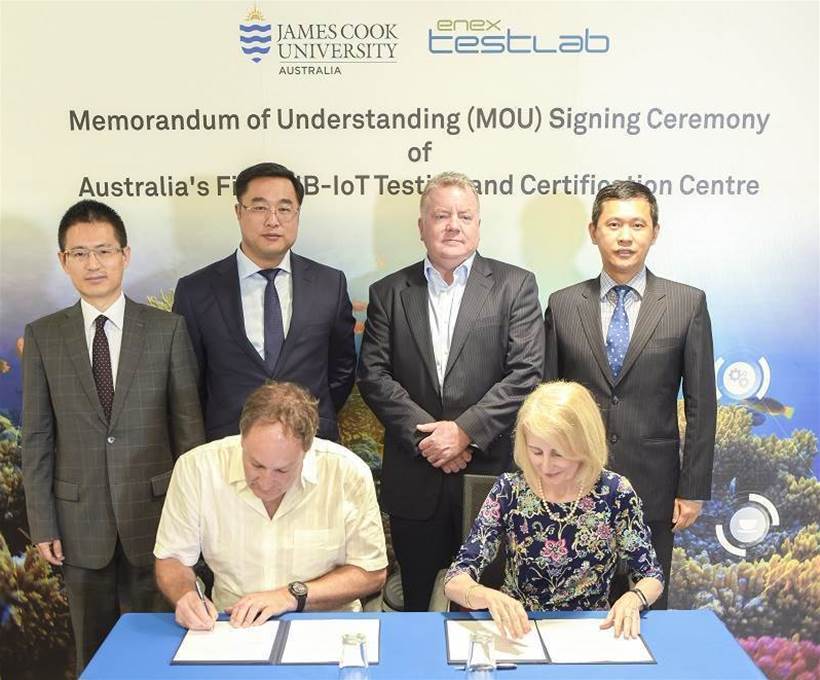 Representatives from JCU, Enex and Huawei at the recent signing of the MOU.

Queensland’s James Cook University (JCU) has ramped up its role in IoT with the announcement of a Narrowband-IoT (NB-IoT) test and certification lab to be built on its Cairns campus, in conjunction with Enex TestLabs and with sponsorship from Huawei.

There are currently only two laboratories in the world accredited to test and certify equipment for conformance with the NB-IoT network standard and the JCU lab is expected to be the third when it opens around mid 2018.

According to the university, companies manufacturing NB-IoT network devices will be able to have their products tested and certified by the lab, enabling them to be sold in any country operating an NB-IoT network.

Enex TestLabs is a Melbourne-based IT testing and verification specialist that is accredited by Australia’s National Association of Testing Authorities (NATA) and certified for conformance with the ISO 17025 standard for the competence of testing and calibration laboratories.

As such, according to director Steven Turvey, Enex will enable the JCU’s NB-IoT test lab to achieve ISO 17025 certification.

“What we bring to the table is NATA accreditation,” he said. “It is not just the technical testing, but from NATA’s point of view, all your business systems have to be perfect as well.

“We will run the client management for the lab, the invoicing and accounting. JCU will do all the technical testing. I will make sure the test procedures meet NATA requirements.”

Wei Xiang, foundation professor and head of discipline for electronic systems and IoT engineering at JCU, said the NB-IoT expertise for the lab would be provided by senior researchers from his department.

Robert Buhrke, business development manager research at JCU, said the business relationship between JCU and Enex to create the lab had yet to be finalised.

Xiang said he expected it would take about six months to fully develop the business model for the new lab, but he anticipated very strong demand.

“We will serve not only Australia but the south eastern market,” he said. “Huawei has over 300 NB-IoT partners and we expect to get most of those coming to Australia for NB-IoT certification.”

Xiang said NB-IoT was the only global IoT communications standard endorsed by the International Telecommunication Union. He made a distinction between NB-IoT and the CAT-M1 cellular-based IoT technology, which he said not a new standard, merely a simplified version of LTE. “NB-IoT is an entirely new standard, designed specifically for machine to machine communication.”

Another string to JCU’s IoT bow

The move to open the NB-IoT test lab follows the opening in February this year of an NB-IoT teaching facility on the campus made possible through the donation by Huawei of equipment enabling the lab to simulate a complete end-to-end NB-IoT network. The same equipment will be used for the NB-IoT test lab.

James Cook University was the first in Australia to offer an undergraduate course in IoT engineering and the first year intake of 15 students are now finishing their second year.  There are 64 students in the current first year and 10 PhD students. The four-year course was accredited by Engineers Australia in late 2016.

Xiang is placing his students in internships through Huawei’s ‘Seeds for the Future’ program, with Queensland power company Ergon Energy and with the CSIRO’s digital agriculture program, but he said there was more demand for interns from industry than he was able to meet, with only 15 second year undergraduate students.

Stuart Corner attended the announcement of the NB-IoT test labs at JCU in Cairns as a guest of Huawei.