A self-managing smart bin for ewaste 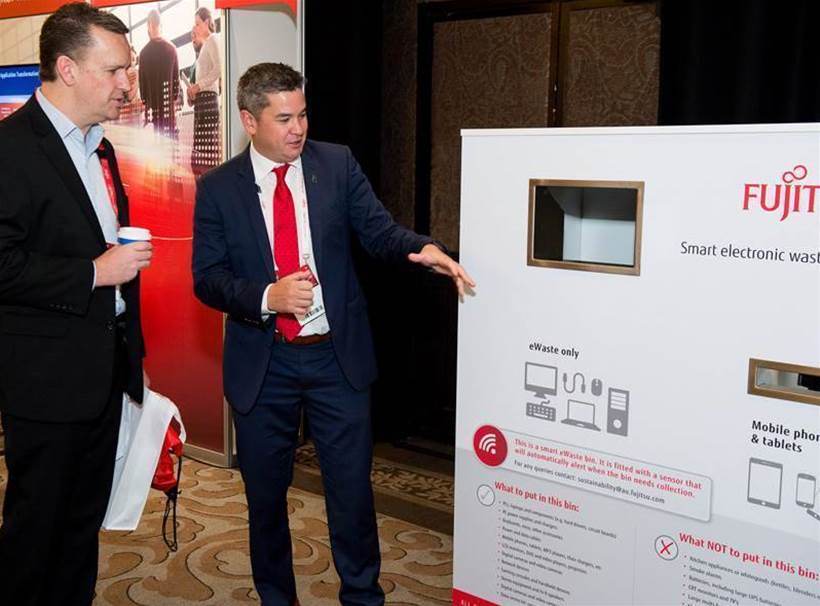 Fujitsu Australia’s entry for the 2018 IoT Awards is a solution to one of Australia’s fastest growing problems: ewaste. Australians on average generate 20kg each of ewaste every year in the form of computers, laptops, mobile phones, etc. Up to 60 percent of these end up in landfill.

Research shows that while 95 percent of us agree that recycling ewaste is important, 45 percent are not recycling, citing lack of awareness of our options or concerns over data security as key reasons.

ewaste contains lead, mercury, cadmium, flame retardants and other toxins and accounts for 70 percent of the toxins in landfill. Illegal ewaste processing in developing countries causes significant health and environmental problems: equipment is torn apart by child labourers and burnt over open fires to reclaim components.

However, up to 95 percent of ewaste (by weight) can be recovered for re-use, including scarce materials like gold and silver as well as commodities such as glass and plastic.

Fujitsu has long been a recycler of its own ewaste and saw an opportunity to leverage technology to broaden recycling by its employees and customers.

After consultation with customers and vendors, Fujitsu Australia developed the smart bin solution, which it describes as “a completely self-contained unit that requires almost no ongoing management and maintenance [and is] attractive enough to sit out in the open in an office or community location where it can be used at any time.”

The bin housing is equipped with sensors that monitor fill levels and send an alert when the bin is full and needs its contents to be collected. Sensors also monitor tilt, temperature and location, so any attempt to move or damage the bin will generate an alert.

The two sensors (with 10-year battery life) send updates to a web portal or phone app twice per day enabling the recycler to swap out the full internal bin for an empty one.

Fujitsu’s recycling partner, Sims Recycling Solutions, and its downstream vendors are monitored by Fujitsu to minimise any risk to data security or the environment.

Sims Recycling Solutions jointly funded the development of the prototype bin, installed at Fujitsu customer Caltex, and worked with Fujitsu to refine communications and design, and assisted with the fill level monitoring to ensure its accuracy.

There are six bins currently deployed across Sydney, Melbourne and Auckland. Fujitsu says it is now working on the next phase of the service, using a process automation tool that will coordinate the courier collection and booking with its ewaste processing partner, so that the entire process will be executed without any human involvement.

In the six months to March 2018 Fujitsu says the bins diverted almost 1.4 tonnes of ewaste from landfill, around 98 percent of which was recycled in domestic facilities.

As an importer of electronic goods Fujitsu has a liability under the Product Stewardship (National Television and Computer Recycling Scheme) Act to contribute towards ewaste recycling.

It says current collection levels represent only a modest saving from this liability, but expects this rise and make a growing contribution to offsetting the rising cost of compliance.

Summing up the scheme, Fujitsu says: “Most hardware competitors offer takeback schemes where they will take own-brand ewaste for recycling at end of life, leaving customers and consumers to make arrangements for the disposal of other ewaste, including peripherals, at their own cost.

“Fujitsu’s smart bin takes the opposite approach – any and all ewaste can be deposited in them, including devices brought in from home, like joysticks and gaming consoles; showing Fujitsu’s commitment to addressing the fundamentals of the ewaste issue. This approach, and the educational material we provide customers, will drive behaviour change for employees both in their workplace and at home.”

The Fujitsu smart bin is a finalist in the Best Secondary Industry Project category at the 2018 Australian IoT Awards being held at the IoT Festival on 4 June in Melbourne.