Tracking tomatoes from tractor to table. 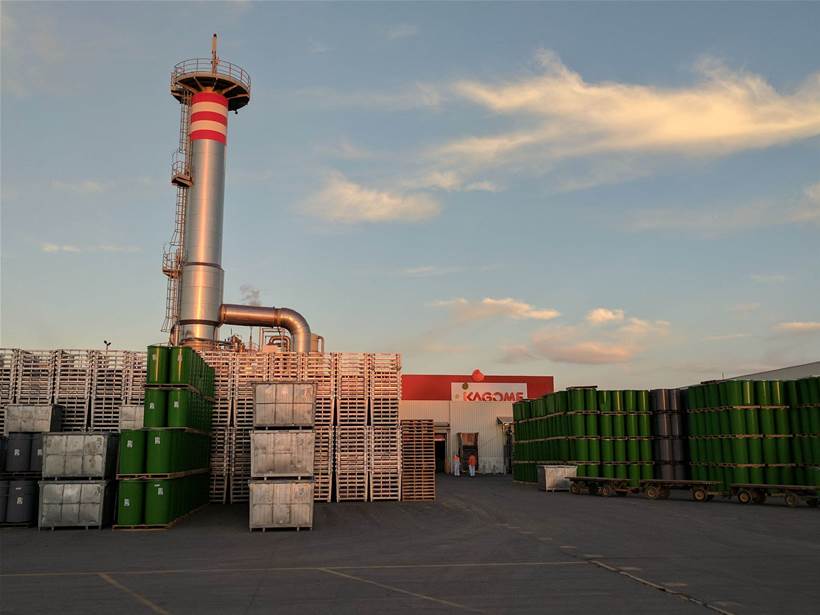 When Kagome’s operation in country Victoria required a better system to ensure quality and traceability of its tomato products, it turned to IoT and cloud platforms to provide it.

Since first commencing trials with field sensors that measured weather, soil and “other conditions” in late 2015, the Echuca plant has expanded its use of IoT to manage all aspects of the tomato product supply chain, from field harvesting, to factory delivery, to in-plant processing and shipment to its customers.

RFID tags and GPS technology have been deployed on the harvesters, tractors and collection bins used by the company to track the actions in the field, and to record the amount of produce collected from them.

From there, trucks would bring these bins to the factory, where a weighbridge would marry up the incoming bins with an accurate weight measure for the incoming delivery.

The bins would then be allocated to one of a number of product lines, where they tip their produce for conversion into either tomato paste or diced tomatoes, depending on the requirements of their customers.

At the other end, the processed tomatoes are then fed into ‘pack-off’ bins and barrels, each with their own RFID tags, and then shipped to its customers, both locally and globally.

This operation occurs non-stop over the processing season, and the multitude of data is fed into Microsoft’s Azure cloud platform, where multiple users – including farm owners, factory staff, end customers and food safety authorities – can access this information via PC or web apps accessible on mobile devices.

The need to digitise

For Kagome’s general manager of field operations Nick Raleigh, this digitisation effort provides transparency for all of the company’s stakeholders.

“For us, it’s about customer confidence, quality, traceability, and adhering to all of the accreditations and standards we’re delivering to our customers, right through the supply chain,” he told IoT Hub.

“We have full visibility of what our harvesters are doing, where our fruit is in the supply chain, how much is being harvested in the field, what’s yet to be brought in, and how much fruit is onsite at the factory.

“So when we put tomato paste into one of those packs and send it out the door, we can trace its contents right back to the field it came from, from the moment it was harvested, and tie it into the other work we’re doing with our field records, our spray and fertiliser applications, our irrigation tracking, the varieties we’ve planted, and so on.”

The numbers that justified the digitisation of its processing efforts are staggering. Within a typical 70-day processing season for tomato-based products, the plant would typically handle approximately 250,000 tonnes of tomatoes, where a 50/50 mix of Kagome-owned farms and contracted growers fed into that supply.

One of the welcome side effects of this greater transparency brought about by IoT is the company’s ability to mitigate threats to the tomato supply, including ‘paddy melons’, an invasive plant species typically found in tomato crops that - when processed with other tomatoes - causes the whole batch to become bitter and unusable.

“We recently had a load come in with paddy melons in it, and within about six to seven minutes we knew that they came out of a particular bin, we knew it was from a field in Lake Boga, and that it had been harvested about eight hours prior,” Raleigh explained.

“We were able to immediately isolate that and have a conversation with the growers there to work out what they were going to do with the issue.

“We would have never had visibility like that in the past, so the technology gives us a level of comfort that we’re not going to end up with a whole batch of tainted product, nor are we going to find out about it in our quality assurance labs twelve hours later.”

Kagome couldn’t have completed this conversion to digital operations on its own, so it called upon Kyabram-based IT services provider and Microsoft Partner, Advance Computing to assist.

Advance Computing’s software development manager Bryant Alford told IoT Hub that when the company was brought on board, it was confronted with a highly manual process that needed a lot of work.

“I was presented with a couple of pieces of paper, and Kagome explained their issues with marrying up what was being harvested in the paddock versus what came over the weighbridge and what was unloaded in the factory,” he said.

“These were all handwritten, which staff had to then reconcile, key the data into spreadsheets, and then into backend systems. They were looking for any ideas on how the process could be automated.”

Advance Computing set about deploying the RFID tags to enable tracking of the bins as they came from paddock to weighbridge to factory, and then including GPS systems to enable location awareness.

Load-measuring cells were also deployed on the trailers that held the bins as they were being loaded with produce, which gave farmers visibility of the weight of the produce they were harvesting onsite.

The real key to the whole operation is the unified data platform hosted on Microsoft’s Azure cloud service, which is accessible from any location and provides that data consistency for all supply chain participants, according to Alford.

“They can see at any given point how many bins are at each farm, how many are full, how many tonnes they have out there, the average age of that product, and they can get all of this information at an individual bin level,” he explained.

“The logistics guys also read off the same information that the harvesters do, so they can see, for example, that a particular bin has been sitting at a site for a number of hours, and can call a truck that’s on its way to that site to collect that bin first.”

“Our guys are currently working on forecasting tomato yields, which for us represents the next evolution in the platform,” Alford explained.

“As the Azure platform continues to evolve, we’re wanting machines to determine where to send the trucks to pick up produce based on predictions on which farms have crops ready to harvest.

“It will still require some sort of human interface in terms of forecasting, but we’re working towards tying this intelligence in with the transport component of Kagome’s business as well, introducing more efficiencies in the process.”