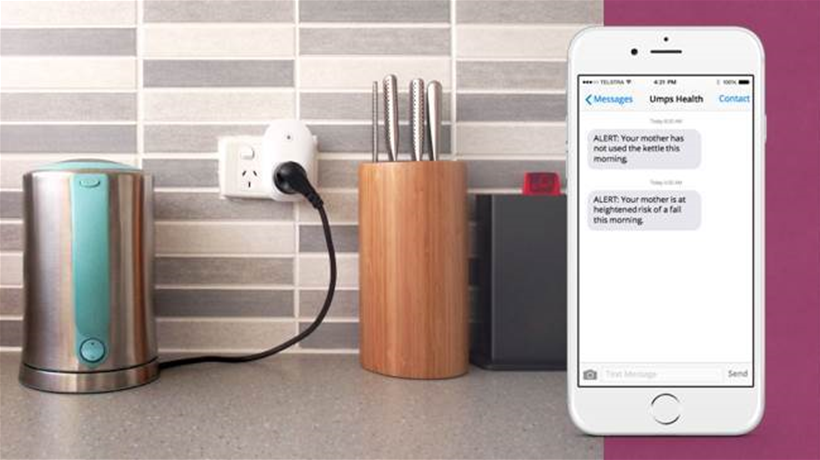 The current industry standard solution to support older people to live safely at home is a pendant with an alarm button, worn around the neck. It has a button that, when pressed, alerts a remote carer that the person requires assistance.

However, Umps Health says more than 80 percent of users of their customers do not wear their pendants regularly, as a result of either forgetfulness, their resistance to bulky wearable technology or because they do not want to appear vulnerable.

The solution, the company says, is “subtle and does not require any change in the user's behaviour.”

Umps Health's solution, which it calls the Non-intrusive Wellbeing Detection system, uses WiFi-connected smart plugs to measure the power consumption of electrical appliances around the home – for example, the kettle, TV, fridge, and microwave. It also uses sensors to detect when lights are turned on and off.

Data from all these sources is collected by a local hub where it is analysed to categorise device usage and to identify key activities of daily living. The results are then transmitted over a 4G connection to a cloud server where machine learning and statistical analysis techniques are used to identify patterns of behaviour and detect anomalies that may indicate illnesses, declines in health states, or a heightened risk of a fall. Alerts are then sent to a family member or carer via text message.

Family members can also log in to a web dashboard at any time to check if their loved one is OK and view the insights generated by the system.

The Umps Health product is being pilot tested in 12 homes. “User feedback has been extremely positive, with several expressing feeling safe without a loss of privacy,” it says.

It claims that analysis of data gathered early in the project found its system could have detected risk factors up to 10 days prior to a fall occurring.

Current alternatives to the pendant system use monitoring devices such as video cameras, motion sensors, and microphones. Umps Health chose not to use these because all have the potential to compromise the user’s privacy.

“The reaction so far from users and focus groups of older Australians has been overwhelmingly positive,” it says.

It sees a large, and growing, market for its technology. “As the population ages, the number of individuals requiring some form of care to remain living is increasing dramatically and existing care frameworks are already struggling to cope,” it says.

“There are currently more than 100,000 Australians on the waiting list to receive an appropriate level of home care funding and the number is growing daily. More than 80 percent of older Australians would prefer to live in their own homes and this solution aims to leverage advances in IoT to support that goal in a simple, cost effective manner - while also providing peace of mind to family members and carers.”

Umps Health is piloting its system with Mercy Health, the largest home care provider in Australia, and is also working with Carers Australia to better understand the needs of informal carers and to help bring its solution to a group of disadvantaged carers free of charge.

It has partnered with the University of Melbourne and was accepted into the Melbourne Accelerator Program in 2017, through which it has received financial support, mentoring and access to talent.

Umps Health’s Non-intrusive Wellbeing Detection system was Highly Commended in the Best Healthcare or Sport Project category at the 2018 Australian IoT Awards, which was held at the IoT Festival on 4 June in Melbourne.